Everybody is keen to get a hold of Arafat's treasures

The Israeli police have recently detained a 50-year-old resident of the Arab village Abu Sanan. He is accused of using explosive devices in a cave of Mount Meron in the north of Israel. Rumor has it that the Chairman of Palestinian Authority had hidden some $50 million in that cave. 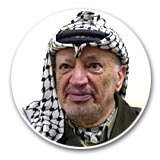 The unlucky treasure searcher made his explosive devices using automatic rifle ammunition. He apparently hoped to get deeper into the cave by blowing the devices. The local residents called the police when they heard the sound of explosion. The police busted a middle-aged man who was too busy to pay attention to anything else but his explosive business. The man was taken into custody of a police station in the town of Carmiel.

The detainee is still in a holding cell. The prosecutors are charging him with illegal use of the explosives. Meanwhile, a bomb disposal squad is taking apart the explosive devices in the cave. They might as well get lucky and find that Arafat's treasure, say some cops jokingly.

Last spring the French authorities launched an inquiry into Arafat's money following a series of bank transfers amounting to $7 million made to the account of his widow during 2002 to 2003. It was the last time the murky money was under scrutiny. Investigators failed to identify the source of funds. They suggested that the transfers could be part of a special fund for military purposes Mr. Arafat had been building up over the last few years.

According to U.S. and Israeli intelligence sources, the late Palestinian leader's fortune is estimated at $6 billion. Other sources say Mr. Arafat's riches are within a range from $365 million to $7 billion. The leaders of the Palestinian Authority began holding heated debates over the 'legacy' of the helmsman while Mr. Arafat was still alive. Several groups claimed their rights for the money. The Arafat family (wife and daughter) was on top of the list. Some leaders of the Palestinian Authority believed the money belonged to the state coffers.