America needs a very strong army to be prepared for possible threats in the future. Russia is one of those “future threats,” the new Pentagon head Roberts Gates said. “We need a full set of measures to conduct a war, including both special military units necessary for war against terrorists and infantry troops to be able to fight against large regular armies. We do not know what changes can take place in such countries as Russia, China, North Korea, Iran and others,” Robert Gates stated. 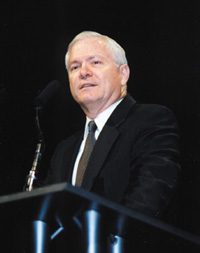 George W. Bush labeled Iran, Iraq and North Korea as “axis of evil” in January 2002. Five years later, when Saddam Hussein’s regime no longer exists, the US administration is still concerned about possible enemies. Moreover, Russia and China have been included on the list of potential unpredictable rivals for the USA, in the same line with North Korea and Iran. Unlike the previous potential enemies, the new ones possess large armies.

Does it mean that the USA is getting ready for an armed conflict with Russia and China – two huge countries that have nuclear weapons at their disposal? Russian military specialists believe that Gates publicly declared the USA’s intention to stand in an opposition with Russia and China. “Robert Gates specified USA’s potential enemies. His speech has most likely been coordinated with the White House and therefore mirrors the official stance of the US administration,” retired colonel-general Eduard Vorobyov told the Vremya Novostei newspaper.

Russia and the USA may launch another arms race some time in the future. The Pentagon does not take only verbal actions to attack Russia. The USA has recently deployed radar stations near Russia’s borders within the scope of the US air defense program.

Missile Defense Agency director Henry Obering said several days ago that the USA completed the redeployment of a sea-based X-band radar from Hawaii to Adak, in the Aleutian islands. The islands are located close to Russia's Kamchatka region. The radar is about 100 meters long and 65 meters wide, rising 25 meters up above the platform. General Obering said that the sea-based radar would help defend the USA and its allies against attacks of ballistic missiles.

The system is very simple, from the USA’s point of view: air defense systems in Eastern Europe will intercept Iranian missiles, whereas complexes based in the Pacific Ocean will destroy North Korea’s hope to attack the US. However, Russia and China, the two new links of the “axis of evil,” according to the Pentagon, have every reason to believe that the US systems are aimed against their nuclear and rocket potential. The above-mentioned X-band radar connected with intercepting missiles in Alaska embraces a huge territory of Russia’s East Siberia, the Far East and China. Such a fact cannot but raise serious concerns with the Russian administration.

Furthermore, deputy director of the Pentagon’s Missile Defense Agency, Patrick O’Reilly said that the USA intends to put the system on high alert during the current year. At present moment the US has 14 anti-missile complexes in Alaska and two more in California. Their number is to be increased up to 21 and 4 respectively. The quantity of air defense systems in Alaska is to reach 40 by 2011.

It brings up the idea that Moscow and Beijing may not be willing to conduct peaceful cooperation with Washington against such a background.

Major-General Alexander Vladimirov said in an interview with the Vremya Novostei that recent remarks from top US defense officials and the current US-led military activities in the world bear a certain resemblance to war preparations. The specialist believes that the current state of affairs is caused with USA’s failures in Iraq and the shattering position of the Republican administration.

Declaring Russia a part of the axis of evil may also be interpreted as an attempt of the US administration to justify the enormous defense spending and inefficient foreign policies of the White House in Iraq and Afghanistan. Russia was obviously not happy with those statements from the US Defense Secretary, although they are not supposed to become a reason for a new arms race between the two countries.