Uruguay's Armed Forces issue report on crimes during their rule

In 2005, Uruguay marks two decades of consecutive democratic rule after 12 years of bloody dictatorships that killed or “dissapeared” about 200 of its citizens. On Monday, after a meeting between the newly inaugurated Socialist President Tabare Vazquez and military commanders, the Armed Forces handed over a report on the victims of human rights abuses committed against opponents to their rule between 1973 and 1985. 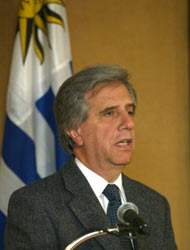 Even when most of these cases took place in neighbour Argentina, there are a number of them that are under investigation of Uruguayan courts. As per the comments made by President Vazquez – the report was not made public yet - the document reads about the destiny of the remians of those killed by security forces within Uruguayan territory, which were buried in mass grves inside Army's premises.

Mr. Vazquez said that his government would study the information before making further comments, but advanced that at least three of the corpses can be now found. Among them, the report identifies the remains of the Argentine daughter-in-law of the world famous Uruguayan poet Juan Gelman.

The case had led to more than one clash with Argentina's Foreign Minstry under President Nestor Kirchner, who personally led the campaign to elucidate the case. “We are 99 percent sure about the location of Claudia Maria Garcia Gelman remains and the existance of other corpses within the premises of Army's 14 Batallion”, told Vazquez to reporters in Montevideo.

The Uruguayan President also commented that the Air Force commander had “detected and confirmed where the corpses of other two Uruguayan citizens are”, but failed to mention the identity of these persons. Vazquez believes that the work done was “intense, serious and responsible”, as thanked commanders for their “commitment to the rules and the Constitution.”

The Uruguayan move toward the elucidation of the crimes committed by the US backed military rules of the seventies and eighties comes after similar steps taken in Argentina, Chile and Peru. In Argentina, where at least 30,000 opponents were killed or “dissapeared”, the Supreme Court of Justice has recently overturned amnesty laws allowing courts to try about 1,000 of military officers accused of human rights abuses.

On the photo: During the campaign, leftist leader Tabare Vazquez had promised to investigate human right abuses committed during the conservative dictatorships that ruled Uruguay between 1973 and 1985