Around 170,000 small arms are being used by former military personnel and criminal gangs to commit grave human rights abuses in Haiti as the country prepares for elections, Amnesty International said in a new report issued last week. Acccording to the human rights group, the US backed interim government and the UN mission led by Brazil are doing nothing to implement a “comprehensive disarmament, demobilization and reintegration program” in the Caribbean nation. 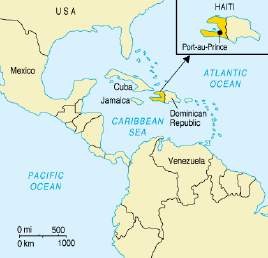 “Small arms are being used by illegal armed groups and former military to kidnap, sexually abuse and kill Haitians with absolute impunity. Without disarmament and effective justice for the victims, Haiti will sink further into crisis,” said Amnesty International. Last month, around 20 pro ousted President Jean Bertrand Aristide were killed in poorly explained clashes with the UN forces.

The report “Haiti: Disarmament delayed, justice denied”, also shows how in several parts of the country, where state authority remains frail, armed groups and individuals continue to illegally control territory and population and commit criminal acts without being challenged by national authorities, including the National Police, or by UN officials. Attempts to disarm illegal armed groups have been insufficient, showing the Haitian authorities “unwillingness to implement an effective disarmament plan,” the report concludes.

Haiti is due to hold municipal elections in October and presidential polls laterin December, in the first elections since a US backed coup ousted popular President Jean Bertrand Aristide in February 2004. Since then an interim administration has been ruling the country legally backed by the UN peacekeeping mission and illegally supported by anti-Aristide irregular bandits.

In March 2005, 325 former military personnel symbolically turned in 7 weapons in Cap-Haitien, marking their return to civilian life. Since then, no serious attempts have been made to disarm the former military and rebel groups.

According to Amnesty International, the lack of political will from the interim government to put in place urgently needed reforms of the National Haitian Police (HNP) or to implement a disarmament program is hampering the efforts of the UN to solve the crisis.

"Lack of accountability of HNP officers and widespread impunity for human rights abuses by armed groups cannot lead to durable peace in Haiti. The interim government is failing in its international and fundamental responsibilities to protect Haitians and their most basic rights."