Democrats warn Bush not to boost US troop numbers in Iraq

Members of the new Democratic majority in the U.S. Congress are calling for American troop reductions in Iraq, amid reports that President Bush is preparing to announce an overhaul of his Iraq policy that could include a short-term surge of thousands of troops into the country. Democrats are planning a series of hearings into the conduct of the war in an effort to hold the administration accountable for a conflict that is unpopular with the American people. 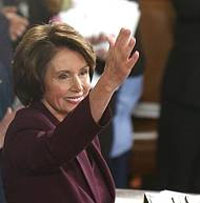 Democrats warn Bush not to boost US troop numbers in Iraq

Democrats Thursday took control of Congress for the first time in 12 years, reminding Republicans that their victory in last November's election was due in large part to the American people's dissatisfaction with the course of the Iraq war.

Among them was the new Speaker of the House of Representatives, Nancy Pelosi of California:

"The American people rejected an open-ended obligation to a war without end," said Nancy Pelosi.

With President Bush expected to announce a new Iraq strategy as early as next week, Pelosi urged him to take a multifaceted approach:

"It is the responsibility of the president to articulate a new plan for Iraq that makes it clear to the Iraqis that they must defend their own streets and their own security, a plan that promotes stability in the region and a plan that allows us to responsibly redeploy our troops," she said.

News reports say President Bush may call for a temporary increase of some 20,000 troops, voanews.com says.

The president is widely expected to propose an increase of 9,000 to 30,000 troops in an address expected Wednesday. Details have not been disclosed officially, and it is possible that the president will attach conditions to any troop surge, such as making it conditional upon actions by Iraqi leaders to stop the violence between Shiite and Sunni Muslims.

Democratic leaders, Reid and Pelosi, emphasized that top U.S. military officers shared their stand against increasing U.S. forces in Iraq. They were increased in Baghdad last summer when Sunni-Shiite violence was raging, and the death toll only increased.

On Nov. 15, Gen. John Abizaid, the top commander for Iraq and the region, said in testimony to Congress that he had asked every division commander in Iraq if more American troops would increase chances of success.

The alternative Reid and Pelosi sketched out was in line with recommendations last month from the bipartisan Iraq Study Group.

''Rather than deploy additional forces to Iraq, we believe the way forward is to begin the phased redeployment of our forces in the next four to six months, while shifting the principal mission of our forces there from combat to training, logistics, force protection and counter-terror,'' the letter said.

They also called for a regional diplomatic push to get Iraqi leaders to find a way to share power and end sectarian fighting, miami.com reports.