Princess Diana was murdered by the Royal Family?

A three-year inquiry into the death of Princess Diana and Dodi Fayed has concluded that allegations of murder were unfounded, and that the Paris car crash that killed the two in 1997 was a "tragic accident," a senior police officer said Thursday. 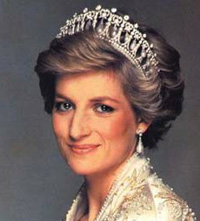 Princess Diana was murdered by the Royal Family?

The inquiry, which largely confirmed previous findings by French investigators, said there was no reason for suspecting the involvement of the royal family, that the princess was not pregnant when she died and nor was she engaged to marry her companion, Dodi Fayed.

"Our conclusion is that, on all the evidence available at this time, there was no conspiracy to murder any of the occupants of the car. This was a tragic accident," said Lord Stevens, former chief of the Metropolitan Police, who led the investigation of the deaths of Diana, 36, and her companion Fayed, 42.

"There was no conspiracy, and no cover-up," Stevens added.

The couple were killed along with chauffeur Henri Paul when their Mercedes crashed in the Pont d'Alma tunnel in Paris on Aug. 31, 1997, while they were being chased by paparazzi.

The inquiry said that blood samples taken from Paul showed his blood-alcohol level was twice the British legal limit, the AP reports.

"We know that the car traveled at excessive speed during the final part of the journey while being followed by the paparazzi. We know the route it took. We can say with certainty that the car hit the curb just before the 13th pillar of the central reservation in the Alma underpass, at a speed of 61 to 63 miles per hour," Stevens said.

"We conclude that nothing in the very rapid sequence of events we have reconstructed supports the allegation of conspiracy to murder."

Stevens noted allegations by Fayed's father, Mohammed al Fayed, that the couple were killed as a result of a conspiracy by the establishment, including Prince Philip and British intelligence agencies.

"I have seen nothing that would justify further inquiries with any member of the royal family," he said. He said William said there had been no indication that she was about to take a second husband.

The report disputed al Fayed's claims that Diana was pregnant and intended to marry Dodi Fayed.

"We are certain that the Princess of Wales was not pregnant at the time of her death," Stevens said. "Our conclusions were strengthened by forensic tests carried out on blood recovered from the Mercedes car.

"From the evidence of her close friends and associates, she was not engaged and not about to get engaged," Stevens said.