USA unwilling to pay for the use of the Uzbek airbase

The Ministry of Foreign Affairs of Uzbekistan offered the USA to discuss the payment issue for the use of the Khanabad army base situated near the Afghan border, an official statement from the ministry said. 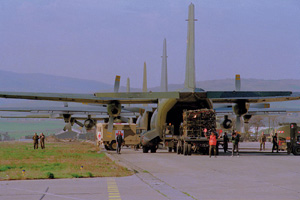 ”The USA has made practically no payments for the efforts of the Uzbek side to guard the Khanabad airbase, create and operate the necessary infrastructure, compensate the ecological damage and inconveniences to the population,” the statement from the Foreign Affairs Ministry of Uzbekistan said.

The USA did not make necessary payments for the use of the airbase from the first day when US aircrafts had been deployed there.

The Khanabad airbase was rendered to the USA in 2001 to conduct rescuing and humanitarian procedures during the military operation on the adjacent territory of Afghanistan, Itar-Tass reports.

A spokesman for the Uzbek Ministry for Foreign Affairs said that the airbase had been rendered to the US Air Force in connection with the military operation conducted in Afghanistan's north. The administration of Uzbekistan did not consider other perspectives for the US contingent to stay on the territory of the country during the decision-making process, Newsru wrote.

The USA launched the anti-terrorist operation in Afghanistan in 2001. About 3,000 NATO soldiers were deployed on the airbase of Magas, the republic of Kyrgyzstan for the US-led operation. About 1,300 US military men are staying on the territory of the Khanabad airbase, Uzbekistan. US cargo planes take on fuel at the central airport of another former Soviet republic, Tajikistan. US and NATO aircrafts were allowed to use the airspace of Russia and Kazakhstan for their operations. There are up to 20,000 American military men currently deployed on the territory of Afghanistan.