The FARC on Trial: Simon Trinidad as Representative

Ricardo Palmera, a Colombian guerrilla better known as Simón Trinidad, is on trial in Washington D.C. for hostage-taking, and related charges of conspiracy, aiding and abetting, and providing material support to a terrorist organization. Trinidad is well-known in Colombia for his role as a negotiator for the Fuerzas Armadas Revolucionarias de Colombia (FARC), a marxist guerrilla army that has battled the Colombian government for more than 40 years. 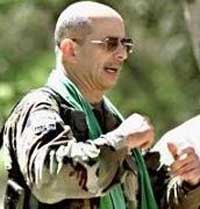 The FARC on Trial: Simon Trinidad as Representative

The charges stem from an incident on Feb 13, 2004, in which a Cessna 208 surveillance aircraft crashed in a FARC-controlled region of the Colombian jungle. After the crash, and the execution of two occupants of the plane, the FARC took three other occupants captive, and have held them ever since, along with about 60 Colombian police, military, and political figures they are holding somewhere in the dense Colombian jungle. The three Americans were employed by California Microwave Systems, a US military contractor. The FARC consider them to be prisoners of war.

Just a few months after the crash, Simón Trinidad was apparently sent by the FARC leadership to Quito, Ecuador, to meet with James Lemoyne, Kofi Annan's special representative for Colombia-FARC negotiations. The meeting was not to be. Trinidad was tracked by Colombian and US authorities and arrested by the Ecuadorans shortly after arrival. There he stated that he was a member of the FARC on a humanitarian mission to discuss the exchange of prisoners, and asked for the protection of the Ecuadoran government. He was shortly sent to Colombia, interrogated by the FBI, and then extradited to the US to face crimnal hostage-taking charges stemming from the Cessna incident.

It's conceded that Simón Trinidad has been a member of the FARC since 1987, working in the Carribean Bloc in the northwest of the country. It is not alleged, however, that Trinidad had any involvement in the Cessna incident itself. He did not give the order to shoot down this plane, and was not involved in the decision to take the Americans as prisoners. It appears that Trinidad's only involvement was to travel to Ecuador to attempt to lay the groundwork for talks on their release.

Although the Colombian government has successfully entered into negotiations with another guerrilla organization, the Ejercito de Liberacion Nacional (ELN), and with the right-wing Autodefensas Unidas de Colombia (AUC), no progress has been made during the administration of President Alvaro Uribe with respect to the FARC. The Colombian government has in principle agreed to negotiations under the auspices of three friendly countries, Switzerland, France and Sweden, but its position has been that a prisoner exchange would only be part of broader talks on demobilizing the FARC. Public pressure, however, forced the Colombian government to raise the issue of a separate humanitarian exchange with the FARC. The FARC responded by stating its terms for the exchange, which include the creation of a small demilitarized zone, which would be limited in duration to what would be required to exchange the prisoners.

The issue of a prisoner exchange has loomed in the background of peace negotiations since at least 1998, when Andres Pastrana was elected President of Colombia with promises of ending the war with the guerrillas. Although Pastrana's experiment, granting the FARC a large demilitarized zone to rule as their own, ultimately ended in failure, the prisoner exchange issue has survived. In 2003, the FARC released hundreds of captives in exchange for a dozen FARC members held in Colombian prisons. Although US and Colombian officials are quick to term the prisoners as "criminals" and "hostages", respectively, the reality is that both sides consider them canjeable - a Spanish word meaning exchangable.

With the capture of the three Americans, and their inclusion on the list of canjeables, all this would come to an end. Trinidad's mission to Ecuador would be met with his arrest, and extradition to the US for hostage-taking. Colombian President Alvaro Uribe gave the FARC an ultimatum: release all the prisoners, including the three Americans, or face extradition to the dreaded north of America, where the harsh treatment of terrorist suspects has become legendary. The ultimatum went unanswered, and Trinidad was flown to Washington DC aboard John Ashcroft's private jet, with an entourage of FBI agents and heavily-armed guards.

The possibility of a canje, with Trinidad himself part of the exchange, came to an abrupt end last week, one week after Trinidad's trial began, when a car bomb injured 20 people inside the military academy in Bogotá. President Uribe not only called off negotiations with the FARC, but also announced that the Colombian military would undertake a mission to rescue the 60 prisoners held by the FARC. The announcement drew little support in Colombia, particularlyamong the prisoners' family members. Nicholas Burns of the U.S. State Department quickly arrived, announcing US support for a rescue attempt. Whatever the fate of the prisoners may be, negotiations with the FARC have hit an impasse.

The prosecutors of Simón Trinidad are breaking new legal ground, in the form of a broad expansion of our criminal conspiracy laws to hold members of a designated "terrorist" organization responsible for crimes committed by other members of the group. The FARC is being described, not as an insurgent army, or even as an army of unlawful combatants, as is the case with the Guantanamo detainees. In Trinidad's case, the prosecutor characterizes the FARC as a criminal "hostage taking conspiracy" of some 20,000 co-conspirators. Members of the designated terrorist organization become co-conspirators through their status as members of the organization. The political decision to label a group as a "foreign terrorist organization" is controlling. The case represents an experiment by the U.S. Department of Justice to try a foreign insurgent using ordinary criminal conspiracy laws.

Simón Trinidad originally had a "co-defendant" in the case - the entire FARC organization. Thomas Hogan, the Chief Judge of the D.C. District Court, went so far as to summon the organization to appear in his courtroom, publishing notices in Colombian newspapers and shortcutting the extradition process. For whatever reason, this unique approach to terrorism was abandoned. The co-defendant army was dropped from the case, and the top 50 leaders of the FARC indicted separately in a drug case hailed as the largest prosecution in US history. Simón Trinidad is not a defendant in that case, nor does he show up in Colombian intelligence documents used to prepare "The FARC Indictment," or in seized FARC documents which describe the organization's leadership. These intelligence reports and captured documents, if admitted into evidence in Trinidad's trial, put the government in the position of convicting a rank-and-file member of an insurgent army as a co-conspirator for crimes he could not have ordered, or even influenced.

The trial began two weeks ago, and is expected to last several more weeks. What is odd about this trial is that very few facts are in dispute. There is no argument that Simón Trinidad is a member of the FARC. There is no doubt that the three Americans were taken captive by the FARC, who are still holding them. There is no doubt that Trinidad knew that the FARC takes and holds prisoners. These are the elements of the charge of conspiracy to commit hostage-taking. This evidence is not only undisputed, but in the form of a slick multimedia presentation, using video clips, computer images of documents, and recordings of radio transmissions, and is supported by some 20 witnesses flown up from Colombia. The jury will not only be convinced, but impressed. And perhaps, even entertained. It is only the rarest of trials that is interesting to watch.

What the jury will not get to decide is whether U.S. laws against hostage-taking should apply to this situation at all. Or whether it is appropriate to use judicial proceedings as a bargaining chip in peace negotiations. The jury will have no idea that their verdict in the trial could have far-reaching implications that go well beyond the fate of the individual defendant. They will not be know the context, or the reason this prosecution is occurring. They will not know that there are some 80 cases pending against Trinidad in Colombia, in which he is being tried in absentia for other FARC activities, or that he is not permitted a private attorney of his choice. After hearing the evidence, they will be given a simple set of rules to follow, called jury instructions. The mechanical application of these instructions can only result in finding the defendant, and the entire 15,000 member FARC organization, guilty of hostage-taking.

Yet the prosecution's efforts have resulted in some leakage of information, perhaps enough to confuse some jurors. The prosecution's proof of the FARC's "demands" for the release of the Americans - in actuality the FARC's response to the government's initiative - has opened the door to some mention of the prisoner exchange issue lurking behind this trial. There is no room in the jury instructions to consider these factors, and the defense's efforts to ask witnesses questions about the subject have been cut off by the judge at every instance. Yet, it only takes one person to hang the jury, and these jurors are being asked to vote on a very abstract idea: whether the negotiator of a "foreign terrorist organization" can be held criminally responsible for the actions of his organization. It would only take one juror to say no, and the outcome is far from certain.