Russian economy to suffer because of 'rogue states'

Russian government is yet to count up the losses 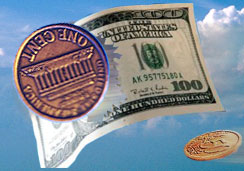 The Bush administration is planning to target the U.S. assets of anyone conducting business with a number of Iranian, North Korean and Syrian companies regarded by Washington to be developing weapons programs, reported Washington Post, citing U.S. officials. These measures will affect the interests of Russian and Chinese companies doing business “the rogue states”. “According to a government list obtained by The Washington Post, three companies identified are North Korean; four are Iranian, including the country's energy department; and one is a Syrian government research facility”.

The last year the U.S. authorities lifted sanctions from a handful of Russian companies, accused of selling the military technology (the Grafit State Scientific Research Institute, Energy Engineering SRI, the "MOSO" company; Evropalas 2000, the High-precision Machinery Research Institute; the Volsk Mechanical Works), after these sanctions had been applied for 4 years.  They still apply against a number of Russian enterprises.

Now the USA decided to concentrate on barring the development of the missile technology in the countries to “the axis of evil”. “The rogue states” have to combine their effort and to seek the necessary technologies and specialist all over the world. In October of the last year the sanctions were applied against 14 state companies from different countries for helping Iran in creating the Shihab-3 ballistic missiles – including 7 Chinese, 2 Indian and 1 in North Korea, Russia, Ukraine and Belarus. Now eight more companies were added to them.

It is especially unpleasant for Russia that the ban list includes Iran's Energy Ministry, as quite a few Russian companies collaborate with this ministry. According to the building contract on the construction of the Busher power station, Russia procures the equipment. The Russian government is yet to count up the losses.

The Chinese are almost not affected by the sanctions, as Bejing consistently defends its interest in the world economy. The USA most likely won't dare to step up the pressure and to apply sanctions not against the companies but against the Chinese government. The Russian government won't be targeted as well, but for the Russian energy companies these restrictions will be quite troublesome.