Chinese man Yu Zhenhuan who was considered to be the hairiest man in the world has become one the most popular rock-stars in his country and has made a fortune through his music. Doctors say that 96% of this man’s body surface is covered with think long hair, which reaches up to 6 cm! 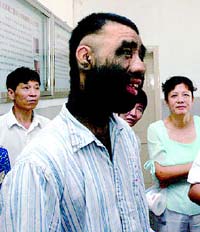 When Zhenhuan was born he was completely covered in hair except for the palms of his hands and the soles of his feet, but by the age of two hairs began growing inside his ears.

Doctors were recommending that he get rid of the extra hairiness in that area but Zhenhuan didn’t consent because he felt too attached to it. The rock-star personally believes that his furriness is a gift from above which separates him from the ordinary mortals.

His music group’s popularity has largely increased due to the soloist’s unusual appearances. But the man ended up in the hospital after he lost a third of his hearing due to the overgrown hair inside his ears that filled the external auditory canals.

When Zhenhuan began feeling nauseous and having headaches the doctors concluded that the hair was presenting an actual danger to the brain, and convinced Zhenhuan to undergo an operation. The surgery in Shanghai ’s hospital went very well, and the musician has recovered.

According to Dr. Chen Jin Yang, the director of laser surgery clinic, this procedure included widening the auditory passage, correcting the birth defect and preventing the hair from growing back.

In 2002 Yu Zhenhuan was considered the hairiest man on the planet by the Guinness Book of Records, but last year Mexican acrobats Larry and Danny Gomez were recognized to be hairier. The 19-year-old twins have 98% hair covering on their bodies.