US presses for quick Iran sanctions

A senior Bush administration official said Thursday that he anticipated that the United Nations would move rapidly in September to impose sanctions on Iran if it refused to halt uranium enrichment, a process central to building nuclear weapons. 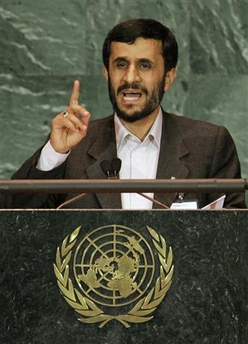 US presses for quick Iran sanctions

The official, R. Nicholas Burns, the under secretary of state for political affairs, said the punishment “will be well deserved” if Iran failed to act by a looming deadline set by the Security Council.

The Security Council voted late last month to give Iran until Aug. 31 to accept a package of European Union-led incentives in exchange for suspending its uranium enrichment, or suffer the penalty of economic sanctions, The New York Times reports.

Russia and China, who support a package of incentives offered to Iran by the West in return for suspending its nuclear program, are expected to argue in favor of further negotiations.

However, Burns said that the U.S. has an “agreement with Russia and China and with the other members of the (UN Security) Council that we will go to Chapter 7 sanctions (if Iran does not comply).”

Chapter 7 of the UN Charter doesn’t pave the ground for military action, an option Washington might seek if Iran refuses to comply with its demands.

Burns has also dismissed Iran’s promises to respond to the package of incentives by August 22, adding that Ahmadinejad's comments that his country would continue with enrichment were "just not going to be good enough", aljazeera.com says.

According to the AP, some critics urged the Bush administration to get on with negotiations with Iran .

A group of 22 former military officials and retired diplomats said President Bush immediately should open discussions. Thursday's letter also cautioned against any consideration of the use of military force.

"An attack on Iran would have disastrous consequences for security in the region and U.S. forces in Iraq, and it would inflame hatred and violence in the Middle East and among Muslims everywhere," the letter said.