After 13 long years of ruling the region, the Kurdish authorities in Iraqi Kurdistan have failed to deliver even basic requirements such as water, electricity and fuel. As the Kurds take to the streets, the PUK has started a vicious clampdown, shooting and arresting demonstrators in the new, “free” Iraq. The Iraqi Kurds need the support of the international community now as they stand up for their rights. 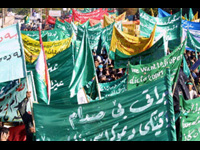 Houzan Mahmoud, representative of the Iraqi Worker Communist Party and speaking for the Iraqi Kurds, declares that “Over the last few days Iraqi Kurdistan has seen a wave of protests and gatherings of people in several towns”.

The protests flared up on 7th August in Darbandikhan and Chamchamal and have now spread to Kefri, Sulaymania and Kalar.

“The people of these towns and cities are demanding basic services such as water, electricity and fuel. As a result of these courageous protests the authorities of the Patriotic Union of Kurdistan - now one of the major ruling parties in the Iraqi parliament - became anxious and started arresting people and raiding houses in Sulaymania,” added Houzan Mahmoud.

The reaction by the PUK security forces has been to arrest a total of some 73 people, including leading cadres of the Worker Communist Party of Iraq and in Darbandikhan the security forces have shot at the protesters. As the protests are set to spread to wider areas in the next few days, the Iraqi Kurds appeal for international support as they claim for basic standards of living.

Houzan Mahmoud coNcludes: “The widespread protests in these cities are a symptom of their anger and the long wait for their demands to be met. Now that the Kurdish authorities have failed to meet the people's most basic requirements after 13 years of ruling the region, people no longer keep quiet, but come out into the streets to show their anger and frustration. Therefore they need international solidarity to continue and achieve their fair and just demands”.

Unconditional freedom of expression and protest

Release all detainees who were arrested during these protests

Provide services such as water, electricity and fuel for the people of Kurdistan

How can you help?

Send letters of protest to the PUK's offices around the world. Details are provided below; also please send us a copy of your letters to the following e-mail address . [email protected]

xpression in detention. sticks, also among the people who they detaind were 50 children under the age of 12 years old, they we For more information you can contact: +00447956883001 www.wpiraq.net

Please send your appeals to: