The Bank of England has frozen the assets of 19 people and named them as people arrested in connection with an alleged plot to bomb British passenger jets. 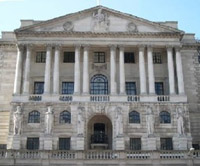 A Treasury statement read: "On the advice of the police and security services, the Treasury has instructed the Bank of England to issue notices to effect a freeze of the assets of a number of individuals arrested in yesterday's operations."

Twenty-four people were arrested on Thursday in police raids in London, the south of England and Birmingham after a police investigation into a plot to blow up several trans-Atlantic airliners, aljazeera.net reports.

US and British counterterrorism officials claimed the men, the majority British Muslims of Pakistani descent, were going to disguise liquid explosive as bottles of soft drink and carry them in their hand luggage on to US-bound planes leaving British airports.

When the jets were in midair over American cities, they planned to combine the explosives and detonate them using an electric charge from an iPod, the security services believe. British Airways flights were among the targets. US officials said the bombers had been seeking to hit New York, Washington, San Francisco, Boston and Los Angeles. Other airlines targeted were thought to be United, American and Continental.

Loss of life might have surpassed the 2 700 killed in the attack on the World Trade Centre in New York five years ago. "This was our 9/11," a British security source said, according to Mail & Guardian Online.