Impatience grows in Mexico as presidential election has no certain winner

Top rivals both claim victory. Officials said they won't know who won for days, raising fears of instability and violence. 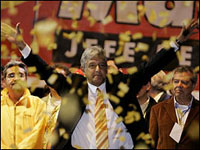 Impatience grows in Mexico as presidential election has no certain winner

Mexicans will have to wait for a few days more to finally know who will be the next president of the country, as the Federal Electoral Institute (IFE) fails to declare a winner of Sunday’s elections. Meanwhile, Conservative Felipe Calderon insisted a slim lead of 400,000 votes in the official count secured his victory, but his leftist rival and former City Mayor, Andres Manuel Lopez Obador, dismissed the claim, questioned the results, and also claimed victory for his party.

IFE officials said on Monday that they would not proclaim a winner until they certify the results later this week, raising fears of instability and violence among observers, as long as uncertainty continues. Analysts warned that the tense situation could be extended even longer, as rivals did not rule out to question the results before courts if they are not satisfactory for them.

With all but about two percent of the ballots counted, Calderon, of the ruling National Action Party (PAN), had just over 36 percent of the vote and a one-point lead over Andres Manuel Lopez Obrador, from the Party of the Democratic Revolution (PRD), who champions the cause of the millions of impoverished Mexicans.

"Today I can assure all Mexicans I won the election," Calderon, 43, told the Televisa network. "There is a result, it is irreversible," he said, pointing out he had garnered 400,000 more votes than his rival.

Lopez Obrador, 52, told the TV network he would closely scrutinize the vote counts provided by every polling station and would accept defeat only if it is clearly proven he had lost."If we won, even by one vote, I will defend it," he said, as did not rule out to call supporters to fill the streets if necessary.

The political standstill is being carefully watched by the European Union, the Latin American countries and the United States. The US administration insisted on Monday it would work with whoever wins the election. Mexico "is an ally and neighbor, and obviously, we've got a great number of shared interests," said White House spokesman Tony Snow.

Mexico's next president, who will take office on December 1, will face formidable challenges in trying to fulfill campaign pledges of battling poverty, corruption, common crime and drug-fueled violence. He will also be hampered by the lack of congressional majority, as the Senate and the House of Representatives has been split in thirds after the elections. The ruling PAN won about 34 percent of the congressional mandates, the PRD 29 percent, and the PRI 27 percent.

Official turnouts showed that the PRD obtained a stunning victory in the capital, the State of Mexico and some regions of the southeast. The PAN overwhelmed the center-left coalition in the north and in the western states of this Latin American nation.