Republicans want to keep Hillary Clinton off the presidential race 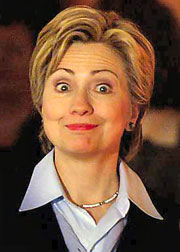 Meanwhile, Hillary Clinton does not want to discuss her presidential ambitions. Next year she is planning to be reelected to the Senate from New York. Her high ratings in the state of New York concern the Republicans. They are also concerned about her attempts to use flexible methods in politics and take advantage of their own trade-mark campaign slogans pertaining to "moral values". The former First Lady and her staff do not make any public statements about her plans to join the presidential race.

The Republicans have no doubts about her presidential intentions. They make promises to do all they can to get her campaign stalled in the Iowa primary. The Republicans launched a campaign that reads "Stop Hillary Now" in the state of New York. Arthur J. Finkelstein, a prominent Republican consultant/spin doctor is in charge of fundraising. The Republicans want to raise $10 million. But despite all the money and efforts poured in their anti-Hillary campaign, the Republicans may fail to accomplish the mission. So far they have not found any prominent personality that could compete Mrs. Clinton in her reelection for the Senate. The former Mayor of New York Rudy Giuliani is not going to run for the Senate at the moment because he is too busy doing business. Perhaps he will change his mind. The Governor of New York George Pataki also said that he had no plans to become a senator.

The election to the New York State Senate is regarded one of the most expensive election campaigns in USA. Hillary Clinton's election bills totaled $39.6 million in 2000. Those who plan to engage in a contest with Hillary Clinton should start fund-raising. At the end of last year Mrs. Clinton had already raised $5.5 million for her 2006 reelection battle. Her fundraising campaign is going at full swing. It is understood that her reelection to the Senate in 2006 would greatly increase her chances to become the next president of the United States. Opinion polls show that residents of the state of New York are ready to cast their votes in favor of Mrs. Clinton even though she might run for president in 2008.

Political supporters and opponents of Senator Clinton have been greatly surprised by recent changes in her "ideology." She seems to be snatching the initiative off the conservative Republicans. She raised her voice against the illegal immigration. Her comments on the issue of abortion are more restrained now. She was 100% pro-choice in the past. Senator Clinton made a few statements on U.S. foreign policy. In particular, she supported the military operations in Afghanistan and Iraq.

The money raised by Arthur J. Finkelstein will be spent on defamation commercials against Hillary Clinton in the media. Mr. Finkelstein is a notorious Republican spin doctor. Being an outspoken critic of Liberalism, he worked hard to turn "a liberal" into a swearword in terms of American politics. He also consulted Jesse Helms (an ultra conservative from South Carolina) during his election campaigns to the Senate and rendered services to the former Israeli Prime Minister Benjamin Netanyahu.

But Mr. Finkelstein happened to be an easy target. He recently announced that he had "married" his male partner in a civil ceremony. Many experts say that the situation is quite paradoxical: a homosexual was handpicked to hunt down Senator Clinton on behalf of the Republican Party that opposes gay marriages. The former U.S. President Bill Clinton called anti-Hillary campaign a "sad phenomenon." "He either thinks his party is insignificant or he loathes himself," said Mr. Clinton in reference to Mr. Finkelstein's activities.