Venezuela is intending to “give a new impulse” to talks with Russia over purchasing some Su-35 fighter jets. They would replace the two dozen American F-16s. This was reported yesterday by Alberto Muller, a General for Venezuela’s Joint Staff and military advisor to the country’s President Hugo Chavez, who himself used to be a colonel in the air assault forces. General Muller called the Su-35 “the best multipurpose fighter jet in the world”, and as far as the American F-16s are concerned, he advised President Chavez to donate them to Cuba or “to sell them to Iran, for example, as spare parts”. In reply the US State Department reminded them that the conditions of basic contracts, including with Venezuela, stipulate that “it is forbidden to pass on military technology produced by the USA to a third country” without the authorization of the Americans themselves. According to Western experts, Venezuela’s Air Force has 277 aeroplanes, of which 177 were made in the USA. 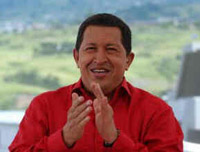 However Caracas thinks that it may be free from fulfilling this commitment, as on 15th May the USA refused to give military aid and any military deliveries to Venezuela, including spare parts for F-16s which were produced back in the 1980s. Washington explained its step through Caracas’ “lack of full cooperation” in the fight against terrorism. Venezuela replied with a promise “to strengthen its ties with Cuba, Iran and North Korea”.

Chavez started to cause immense aggravation to the White House immediately after taking charge of Venezuela which is the fifth-largest exporter of oil and gas in the world, most of which is delivered to the USA, in early 1999. But the colonel came to power as a result of free elections which he won with slogans for fairly reorganizing society and not accepting “globalization which America imposes on the rest of the world”.

The large-scale social programmes directed at the poor sectors of the population (and they make up the majority in 24-million strong Venezuela) brought Chavez subsequent victories in the presidential elections of 2000 and in the nationwide “referendum of trust” in 2004.

After the US invasion of Iraq in 2003 Chavez referred to Bush as “another Hitler” and “the most dangerous terrorist in the world”, and called the USA “the empire of evil with colossal opportunities to harm other countries”. The USA firstly accused Chavez of irresponsible populism, then of dictatorial tendencies, after which in spring 2005 Venezuela concluded agreements with Russia over purchasing 100 thousand AK-103 and 104 machine guns and dozens of helicopters. Moscow fended off the Americans’ discontent by arguing that the transactions were entirely lawful since Venezuela was not bound by any international sanctions. Furthermore, Russia alluded to Brazil and Spain which had been delivering patrol boats and cargo planes to Venezuela.

In February this year Secretary of State Condoleezza Rice described Chavez as “one of the greatest threats to democracy in Latin America ” and called for the creation of a “united front” against him. At that time Chavez said that “100 thousand Russian ‘Kalashnikovs’ will not be enough for us – we will create a people’s militia made up of a million well armed men and women”. And he threatened to blow up oil companies in the event of an “attack by US imperialism”. The President defined this plan of action as an “asymmetrical reply to Bush’s military machine”.

However by the end of April the USA was faced with the unpleasant prospect of having to deal with a “united front” of an entirely different kind. Chavez, the Cuban leader Fidel Castro and the new left-wing president of Bolivia Evo Morales signed a pact in Havana entitled “The Bolivarian Alternative for the Americas” (named after Simon Bolivar who in the 19th century headed the liberation movement of Latin Americans against Spanish occupation).

The treaty was presented as a trade agreement, but soon after the Havana summit Morales nationalized the transnational oil and gas companies in Bolivia. But on learning of the introduction of an arms embargo by the USA , Chavez explicitly talked of the formation of a “strong left-wing bloc” in Latin America. The aim is “to build Bolivarian socialism for the 21st century, which could put a stop to wild capitalism and save the world”. The 51-year old leader of Venezuela does not rule out the possibility that the left-wing governments of Argentina, Brazil (the largest country on the continent) and possibly Chile may work alongside the new organization.