John Paul II died on Saturday, April 2nd, at 21:37 CET. A spokesman for the Vatican announced the sad news to over 60,000 people, who gathered on St.Peter's Square. It was said that the Pope managed to raise his hand to bless the faithful before he passed away. 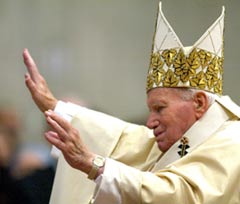 Cardinal Angelo Sodano, the Vatican's No. 2 official, read a psalm out to the tearful crowd in Latin and Italian languages. Church bells started tolling on St.Peter's Square, making a lot of people burst into tears and raise their eyes to the windows of the Pope's apartment.

The Pontiff's body is to lie at the Vatican Basilica for several days for public viewing. The burial of John Paul II will take place after the public viewing ceremony, on April 6th.

The statement from the Vatican runs: "The Holy Father died this evening at 9:37 p.m. in his private apartment. All the procedures outlined in the apostolic Constitution 'Universi Dominici Gregis' that was written by John Paul II on Feb. 22, 1996, have been put in motion." The statement means that the Pope's death has triggered the election of his successor.

According to 'Universi Dominici Gregis,' the new head of the Roman Catholic Church will be elected at the congregation of cardinals; the maximum number of conclave members is 120. The current number of members makes up 117 cardinals, RIA Novosti reports.