Lopez Obrador is now behind conservative Felipe Calderon, according to opinion polls. 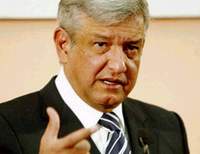 Mexico’s presidential race is now too close to call, after a string of mistakes by previous leftist leading candidate, Andres Manuel Lopez Obrador, made him lost support and he is now locked in a tight race with conservative Felipe Calderon. Lopez Obrador failed recently to attend to a key TV debate in an attempt not to risk his leading position in the opinion polls, but the empty chair was just another blow to his campaign, according to observers.

According to the last researches, the conservative ruling party candidate is in a roll and took a close lead in the race, after Lopez Obrador’s support slumped 10 percentage points in recent weeks. An opinion poll in the respected newspaper Reforma on Wednesday showed 43 percent of people thought Calderon won the debate, compared to just 18 percent who said third-placed candidate Roberto Madrazo came out ahead.

"We did very well last night," a jubilant Calderon said this week. "I know I won the debate." He also pointed to a separate election poll this week that showed him with 38 percent support among probable voters, ahead of Lopez Obrador for the first time. "Even before the debate, I was moving up strongly and Lopez Obrador was falling strongly," he said. "The debate was one more step toward the presidency."

Calderon is the candidate of the Mexican elites and enjoys the support of the powerful financial markets of the country. However, the conservative leader knows that he needs the votes of the middle class and some of the poor to become elected president in the July 2 election.

That is why Calderon is promising voters he will create more jobs and reform Mexico's inefficient energy industry to expand his support. Meanwhile, he promises to maintain the conservative fiscal policies of President Vicente Fox, whose election victory in 2000 ended 71 years of single-party rule.

Lopez Obrador, on the other side, is the candidate from the Party of the Democratic Revolution, and pledges to cut poverty by spending heavily on welfare programs and create jobs with big infrastructure projects. He is very popular in Mexico’s Capital and among the poorest masses of the provinces. Madrazo, in turn, has the support of the most well organized party of Mexico, the Revolutionary Institutional Party (PRI), that ruled the country from 1929 to 2000.

Pro Calderon media alleged that Lopez Obrador ‘s decision to avoid the debate “showed disrespect toward ordinary people”. "I have daily communication with people," Lopez Obrador told a radio station trying to knock down allegations. "Every week I have direct meetings with 100,000 people in town squares. Most people know my proposals and in no way do I consider it a lack of respect." Lopez Obrador insists he is way ahead of Calderon and has said he will join a second debate in early June.

As male candidates fight for the votes, a trio of up-and-coming leftist female candidates have raised eyebrows by posing in skimpy outfits and sexy positions for a men's magazine.