Queen Elizabeth II was born in London on April 21 1926. She was the first child of the Duke and Duchess of York, George and Elizabeth Bowes-Lyon. Five weeks after her birth she was christened in the chapel of Buckingham Palace and was given the names Elizabeth Alexandra Mary. 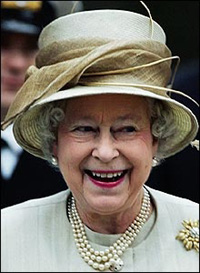 Along with her younger sister, Margaret, she was educated at Home and with her becoming Heir Apparent to the throne in 1936 she started to study constitutional History and law. She was thrust into public duty at the age of 14 when she made her first radio broadcast to all the Children of Britain and the Commonwealth, especially those being evacuated due to the Second World War.

After the Second World War Princess Elizabeth's public engagements grew in number and frequency. Her first official visit overseas took place in 1947, when she accompanied her parents and sister on a tour of South Africa.

After the Second World War Princess Elizabeth's public engagements grew in number and frequency. Her first official visit overseas took place in 1947, when she accompanied her parents and sister on a tour of South Africa.

Princess Elizabeth married Philip Mountbatten, her 4th cousin, in Westminster Abbey on November 20, 1947. In October 1947 the Commissioner of the Turks and Caicos announced that he would be glad to receive subscriptions for a wedding present for Her Royal Highness Princess Elizabeth.

During an Official tour of Kenya in 1952 Princess Elizabeth was informed of the death of her father, and that she was now Queen Elizabeth II. She immediately returned to England to take up her duties and to lead the nation in mourning the death of King George VI. Her coronation took place in Westminster Abbey on June 2, 1953.

In 1977, the Queen's Silver Jubilee was celebrated in the United Kingdom and throughout the Commonwealth. Accompanied by the Duke of Edinburgh, the Queen traveled some 56,000 miles to share the anniversary with her people.

The following are the most interesting and unknown facts about Queen Elizabeth II.

Queen Elizabeth II is the fortieth monarch since William the Conqueror obtained the crown of England.

In 2002, at 76 years of age, The Queen was the oldest monarch to celebrate a Golden Jubilee. The youngest was James I (James VI of Scotland) at 51 years.

The Queen has personally held over 540 Investitures.

The Queen has received over 3 million items of correspondence during her reign.

The Queen is patron of more than 620 charities and organisations.

During her reign, The Queen has undertaken over 256 official overseas visits to 129 different countries.

The Queen has sent around 100,000 telegrams to centenarians in the UK and the Commonwealth.

The Queen's real birthday is on April 21, but it is celebrated officially in June.

The Queen has opened 15 bridges in the United Kingdom during her reign.

The Queen has given over 91 State banquets during her reign.

The Queen learnt to drive in 1945 when she joined the Army.

The Queen has 30 godchildren.

The first football match The Queen attended was the 1953 FA Cup Final.

The Queen sat for the first and only hologram portrait in 2003.

The Queen was the first British Monarch to visit China when she visited in 1986.

The Queen sent her first email in 1976 from an Army base.

The Queen has visited the sets of a number of popular British soap operas including Coronation Street, East Enders and Emmerdale.

The following are Queen Elizabeth II’s most famous quotations:

“The upward course of a nation's history is due in the long run to the soundness of heart of its average men and women.”

“We lost the American colonies because we lacked the statesmanship to know the right time and the manner of yielding what is impossible to keep.”

“They are not royal. They just happen to have me as their aunt.”

“To what greater inspiration and counsel can we turn than to the imperishable truth to be found in this treasure house, the Bible?”

“It's all to do with the training: you can do a lot if you're properly trained.”

“Work is the rent you pay for the room you occupy on earth.”

“I have to be seen to be believed.”