Venezuela will no longer be an Andean nation 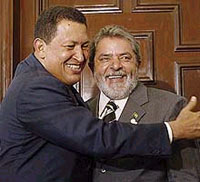 Venezuela will no longer be an Andean nation

In a previsible move since its approaches to the other main trade bloc of South America, the Mercosur, the Venezuelan President Hugo Chavez made public his plans to withdraw from the Andean Community of Nations over the pro-Washington policies of its other members. "Venezuela is leaving the Andean Community of Nations," Chavez said in comments broadcast by Venezuelan television after he attended a conference with South American leaders in Paraguay. "It doesn't make sense; we have to do something else."

Venezuela has criticized Andean nations as being overly aligned with the United States, as its most prominent members, Peru and Colombia, have recently signed free trade deals with Washington. Other members of the bloc are Ecuador and Bolivia.

Chavez feels more comfortable with the most independent line adopted by the main Mercosur members, Argentina and Brazil. Last year, the Mercosur admitted Venezuela as an associate member, but is waiting for a formal decission to leave the Andean Community to give full membership to the oil-rich nation.

However, the internal situation in the Mercosur bloc is far from being as peaceful as he might have wished. An angry dispute between Argentina and Uruguay over the construction of two paper plants in the border between both countries has sparked a controversy between the big boys - Argentina and Brazil - and the small ones - Uruguay and Paraguay.

Both Uruguay and Paraguay say that last moves adopted by the bloc are against their national interests and that Argentina and Brazil do not listen to their demands. In the same meeting where Chavez announced its plans to leave the Andean Community of Nations, the Socialist President of Uruguay, Tabare Vazquez, said that “as for today, the Mercosur is useful”.

Chavez has built strong political alliances with Mercosur governments by supplying the country's bountiful oil at advantageous terms. Venezuela, Argentina and Brazil are discussing the construction of an oil pipeline which will drive Venezuelan oil to the Southern cone across the Amazon jungle, in what is meant to be the most ambicious regional infrastructure project in decades.

Bolivia has already expressed its intentions to participate in the project, from which Peru, Colombia and Peru will be excluded.