US administration unwilling to pay for its army base in Kyrgyzstan

Kyrgyzstan’s President Kurmanbek Bakiev has warned Washington that Bishkek may terminate the agreement on the stationing of an American airbase on Kyrgyz soil. Mr. Bakiev has made this move a few days before his first official visit to Moscow. By all appearances, his announcement, made during a TV appearance, was meant to show that Kyrgyzstan’s main geopolitical ally should be Russia, not the USA. 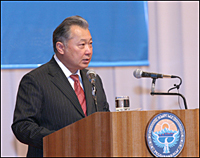 US administration unwilling to pay for its army base in Kyrgyzstan

According to the Kyrgyz president, when he concluded the agreement on 4th December 2001 over the stationing of an American airbase Gansi at the capital’s airport Manas, Bishkek “had moved closer towards the international anti-terror coalition”, even though this development caused “a certain concern” among Kyrgyzstan’s partners “in regional and other organizations”. Kurmanbek Bakiev explained that he was forced to make the announcement because of “the concern of the Kyrgyz public over the lack of clarity in solving the question, which had been drawn out for 9 months”, of whether to conclude another agreement defining the conditions for “extending the stay of military and civil personnel representing the US Ministry of Defense” in his country.

Bishkek is demanding that the Americans pay “just over two million dollars more” for leasing the Gansi airbase, making a total lease of 207 million dollars, noted Mr. Bakiev. “There are international norms over how much a square metre on the territory of this level of international airport costs,” said the Kyrgyz President several months ago, “we are not that rich a country that we can afford to let other countries have these facilities for free”.

The current Kyrgyzstan leadership first voiced their demands to the Americans in autumn 2005, a short time after the ultimatum issued to the USA by Uzbekistan. At that time Tashkent demanded that the American airbase at Hanabad be closed down in revenge for Washington’s harsh requests for an international investigation to be carried out into the events at Andijan. Tashkent’s demands were for all intents and purposes supported by the members of the Shanghai Cooperation Organization, headed by Russia and China. The sensation of the SCO summit of July 2005 in Astan was the “ Shanghai members’” appeal for the USA to reconsider the end limit for the stationing of American military bases in Central Asia.

Unlike Tashkent , Bishkek acted more cautiously then, yielding to Washington’s calls to reconsider the financial conditions in the agreement on the presence of the Gansi base. In October US Secretary of State Condoleezza Rice arrived in the Kyrgyz capital. After her meeting with Kurmanbek Bakiev, she said that “the negotiations on the military base had been successful”. But since then no agreement has been reached. A few days ago the US Ambassador in Bishkek Mary Jovanovich remarked that “it is a difficult question which experts are working on at the current time, studying the details of future agreements”.

Bishkek decided to hurry the Americans. Yesterday Mr. Bakiev warned Washington that the negotiating process must be completed by 1st June 2006 . Otherwise the agreement will be terminated.

This is Bishkek’s second move with regard to Washington in the last two days. On 18 th Aprilthe Kyrgyz Foreign Ministry made an announcement in which it appraised the US Ambassador’s statements as “interfering in foreign affairs and applying definite pressure on the Kyrgyz leadership”. In the Kyrgyz press he commented on Bishkek’s entry into the NIPC programme, which provides for the alleviation of the debt burden for the poorest countries. Kyrgyzstan’s foreign debt now amounts to two billion dollars. Most of this debt was accumulated under former president Askar Akaev. If Kyrgyzstan joins the NIPC, then under certain conditions almost half of its arrears will be written off. In an interview on the 15th April with the agency AKIpress, ambassador Mary Jovanovich said: “Taking into account Kyrgyzstan ’s budget of 350 million dollars, I think that Kyrgyzstan can ill afford to do without this programme”.

In Kyrgyzstan itself a stormy debate has broken out over the need to join the programme for “the poorest countries”. Opponents think that joining it will deprive the country of the opportunity to obtain foreign credit in the future. However there are supporters of entering the NIPC within the government, particularly in the finance ministry. It will obviously be the political leadership which makes the final decision.

We should note that her Russian colleague in Bishkek Evgeniy Shmagin also condemned the American ambassador’s comments. “It is not up to ambassadors and foreign representatives to teach our Kyrgyz friends how to act politically and economically,” he said at a press conference devoted to President Bakiev’s forthcoming visit to Moscow. Observers in Bishkek note that in the run up to this visit, the head of the Russian President’s division for interregional and cultural links with foreign countries Modest Kolerov visited the Kyrgyz capital.

In preparation for the negotiations in the Kremlin, Mr. Bakiev is visibly displaying unprecedented political activity on his “home front”. Yesterday evening, by the authorities’ initiative, a “round table” tookplace on state television, in which the President, Prime Minister Felix Kulov, the speaker in parliament Marat Sultanov and the opposition, represented by a group of deputies headed by ex-speaker Tekebaev and leaders of civilian society, took part. This was the leadership’s reaction to the opposition’s intention to encourage tens of thousands of people dissatisfied with the authorities’ policies to go out onto the streets on 29th April. In Bishkek alone the rally is expected to bring together about 30 thousand people.

The opposition formulated their demands to the leadership as “10 simple steps to the people” (incidentally that was what the Kazakh and Ukrainian presidents called their transformation programmes). The mains steps involve carrying out constitutional reforms, to guarantee the transition from a presidential to a parliamentary form of government, fighting corruption and crime. They also are demanding the resignation of leaders in the president’s administration, the secretary of state, the general prosecutor, the head of the national security service and members of the government, about whom parliament has already registered its distrust.