This year Central Europe has been tormented by raging, turbulent weather. To begin with it was overwhelmed by unprecedented snowfall. And now, as the snow is melting rapidly, country after country is being engulfed by muddy spring waters. Flood water has covered Germany, Austria, Czech Republic, Slovakia and Hungary. Soon Romania and Poland will also be submerged. 18 people have already fallen victim to the floods. 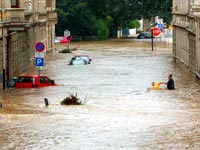 Click here to see the photo report of the European flood

The spring tourist season in these countries has been totally undermined. It will take at least a month to restore what has been destroyed. People planning to cross the “European Atlantis” should really give some thought as to whether they are ready to face mile-long detours, traffic jams, or even having to swim.

In Germany, which was first to be flooded, towns in Saxony, Thuringen and Bavaria are being evacuated. A state of emergency has been declared in Dresden, and the floodwater is approaching the famous art gallery there. The army has been called upon to help fight the deluge.

Czech Republic has been no less badly affected: villages have been washed away, towns have been flooded especially in Northern and Southern Moravia . A special order has been introduced in many areas of the country. The Vlatva is threatening to burst its banks, and in that case half of Prague will end up under water, as happened several years ago.

In Slovakia more than 200 communities are in the disaster area. In Austria the evacuation of affected regions is taking place. One of the oldest dams in the country has burst.

In the near future specialists expect the water to rise in the Elbe, Danube and Morava. By their predictions another deluge could reach the scale of the 2002 flood, when a good quarter of Europe ended up under water, more than 200 people perished, and the damage amounted to tens of millions of euros.