The eccentric family of Peru’s favourite to become next president 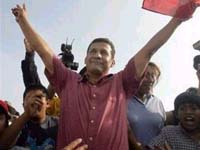 The eccentric family of Peru’s favourite to become next president

The family of Ollanta Humala, one of two favourites to become Peru's next president ahead of April elections, is so eccentric as the nationalistic leader himself. While Humala’s brother, Antauro, vows for the execution of incumbent president Alejandro Toledo and hundreds of his collaborators; his mother, Elena, made calls to exterminate gays and lesbians. Earlier, the father, said that his son should release former Maoist guerrilla leader, Abigail Guzman, if finally elected president.

Ollanta Humala, a former army trooper with a dubious past in the fight against Maoist insurgency in the eighties, jumped to the top of all opinion polls thanks to his anti-imperialistic – read: anti-US- rhetoric and promises to ease the situation of the poor majority. He is popular in the rural areas, but he lacks of confidence amid urban masses.

Ollanta Humala has two brothers: Antauro, who has been sent to prison after leading a coup against incumbent President Toledo, runs for parliament in the ticket of the other brother, Ulises. Ulises stands as one of his rivals in next month’s elections. These two now accuse Ollanta of "pandering to established political interests".

Isaac, the father of both and a former militant in the Peruvian Communist Party, backs Ulises. But the father's real enthusiasm is for the eccentric philosophy of "Etnocacerismo". This racist creed, which Isaac founded, calls on indigenous Americans, whom he calls "coppers", to take on the "whites", and their sidekicks the "blacks", and keep the "yellows" at a safe distance.

"The new world struggle is not between the Left and the Right, it is between the globalisers and the globalised and Peru falls into the latter category," has said Humala. "We have to fight the pernicious effects of globalisation. I am a nationalist and anti-imperialist."

Detractors believe Humala is pretending a leftist leadership but he stands for a nationalistic far-right rule. Others say Humala will be a new Lucio Gutierrez, in reference to the former president of Ecuador who also jumped to power after leading a military coup under leftist slogans, and was ousted by the Ecuadorean people after espousing pro-market policies.

Humala, the former army colonel and coup leader is now a few points ahead the former frontrunner for the April 9 elections, Lourdes Flores, in polls that underplay his support among the poor. The former president of Peru and leader of a center-left coalition, Alan Garcia, goes third, but has utterly increased his support among young Peruvians.