Castro: “The sun vanished from the horizon when the Soviet Union collapsed”

After two years of scaling back reforms introduced during the deep crisis that followed the fall of the Soviet Union in 1991, Cuba's economy is recovering well and it will reach soon output levels previous to the 1990-1993 shrank. In a recent speech to economists, Cuba's leader Fidel Castro said that the communist state was “rising again like the phoenix” from the ashes of its post-soviet crash. 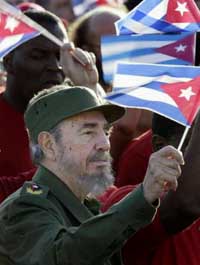 According to Castro, “the sun vanished from the horizon when the Soviet Union collapsed”, and the government was forced to introduce a number of pro-market reforms to avoid a complete disaster. However, as country's economy was finally stabilized, for two years Cuba has been steadily centralizing control again over state companies by scaling back autonomy.

It has also introduced foreign exchange controls, eliminated the U.S. dollar as legal tender, increased regulation of foreign companies and curbed private enterprise in a return to a classic command economy that is 90 percent state-owned. According to Castro, the centralization of state company operations will save Cuba between $500 million and $1 billion.

However, not only the tightening of state controls helped Cuba to recover, but also a big help from China and Venezuela, Castro's closest allies. China's state-owned Minmetals Corp. signed an agreement in November to invest $500 million in a joint-venture that aims to produce 68,000 tons of ferro-nickel per year. Nickel is Cuba's top export and half of its production goes to the Asian giant.

As for Venezuela, both countries have a services-for-oil program in force by which Cuba gets vital supplies of Venezuelan crude, officially 53,000 barrels a day, on preferential terms. In payment for the oil, Cuba has sent up to 20,000 doctors, dentists and teachers to secure success of Caracas' ambitious social programs. Havana says that up to 30,000 Cuban professionals will be working in Venezuela by the end of the year.

In political terms, recently elected progressive governments in South America allowed Castro's regime to breathe fresh air in the region. Conservative administrations of the nineties tended to isolate the island following US policy voting against Castro's regime at the UN Human Rights Commission, for example.

Today, Cuba enjoys the support from countries like Brazil, Argentina and Venezuela, just to mention the most important of them, as keeps on restoring diplomatic ties with others as Peru and Panama. Uruguay's leftist president-elect Tabare Vazquez announced that the first decision of his government will be to restore ties with Cuba as soon as he will be sworn in. Castro will attend to Vazquez inauguration ceremony in Montevideo on March 1.