Violence recruits in Colombia as rebels take the offensive

Colombia's conservative government and its troops look confused and disappointed as an unexpected offensive by Marxist rebels put an end to a 2-1/2 years retreat killing at least 50 soldiers in the last two months. The Revolutionary Armed Forces of Colombia, or FARC, has taken the initiative in the 40-year war, upsetting government efforts to crackdown on them. 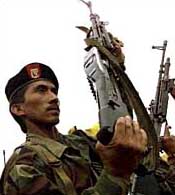 The timing for hard-liner President Alvaro Uribe and his Washington allies could not be worse, as both have depicted their policy for Colombia as a great success. Accordingly, Uribe is asking the US Congress for another $700 million, which brings the total cost for Plan Colombia - a US military aid program - over the $4 billion mark.

However, as the US becomes more and more involved in the internal conflict of this South American nation, results are far from being good. The military record for the last two months speaks by itself.

An army column that had penetrated the mountains of northwest Colombia last month was hit hard, with 19 soldiers dead and five missing - the worst single military setback of the Uribe era. A week earlier, the FARC ambushed a remote naval infantry base in the south, killing 16 marines. Earlier that week, eight soldiers were killed in a FARC bombing.

Those actions came shortly after the Colombian government stated that the FARC's military threat has been contained. In fact, local authorities were in the offensive for almost three years, but judging for current events could not strike the FARC a decisive blow.

Apparently, rebels took this time to study new combat tactics to drive back regular forces, something that worries Colombian generals and the officially admitted 600 US officers stationed in the country. Analysts explained that guerrillas chop up army units in small pieces, encircle them and then eliminate them, while the army has had no answer to these tactics.

In the midst of the guerrilla offensive, 20 more Colombian soldiers were killed last Thursday when a US-supplied Blackhawk helicopter crashed during a night time anti-narcotics mission. The aircraft crashed in mountainous southwest Colombia deep in the heart of FARC country, but authorities denied it was shot down.

Colombian authorities have never acknowledged this kind of crashes as provoked by rebel fire. However, alternative explanations usually sound groundless to military experts.

No matter the good performance of its military side, the FARC keep on losing another decisive battle. While their actions cannot secure them a decisive victory bringing the whole scenario into a deadly stalemate, the FARC have dismissed any political initiative to get closer to a population that increasingly dislikes them. The powerful military apparatus looks comfortable in the midst of war and lacks of alternatives for peace.