The relations between the USA and Syria are worsening very fast. The US administration has virtually accused Damascus of being implicated in the murder of the former Prime Minister of Lebanon, Rafik Hariri. American officials have absolutely no evidence to prove it, although the US ambassador to Syria, Margaret Scobey, passed a rather harsh note of protest to the government of Syria. The note expresses the USA's deepest indignation and concern about such a horrible terrorist act. Scobey had to return to the States to conduct urgent consultations. 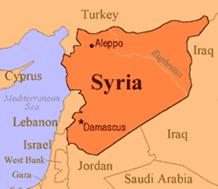 It is noteworthy that the suspicion of Syria's implication in Hariri's murder is based on the fact that the Lebanese billionaire demanded immediate withdrawal of Syrian troops from his country. That is why Damascus was supposedly interested in removing the Lebanese prime minister. That was probably true. However, if Syria is involved in the assassination of the Lebanese politician, it would also mean that the whole nation has been set up. Syrian officials are perfectly aware of the fact that any accusation of the kind would end up in a very strong anti-Syrian campaign – both in the USA, Israel and in the Western press.

According to one of the latest statements from Condoleezza Rice, such a campaign has already started. The US Secretary of State said that the Syrian government was going along the way, which could only bring damage to mutual ties. According to Ms.Rice, the USA does not like the direction of the US-Syrian relations. The American government, however, would continue looking for other variants that it might have at its disposal, Rice added. The US Secretary of State did not specify if the USA was going to impose new sanctions against Syria.

On the other hand, Syria and other Arab countries of the Middle East accuse Israel of Rafik Hariri's assassination. Israel is said to be interested in destroying the national integrity of Lebanon and unleashing a new civil war in the country. Buthaina Shaaban, a minister of the Syrian government, said in an interview with the La Repubblica (Italy) that accusing Damascus of killing Hariri would be similar to saying that it was the USA itself that arranged 9/11 attacks. According to the official, neither Syria, nor other countries of the Middle East have the technology that was used during the terrorist act.

There is another aspect, which will most likely add more tension to Syrian-Israeli ties. Israeli Prime Minister Ariel Sharon stated on Tuesday that Russia would eventually sell missile complexes to Syria. According to the chairman of the Israeli government, he has already received an adequate notification about it from Moscow. Sharon did not expose any further details on the matter: the premier only said that he could not reprise the wording of the letter, which was left in his office.

Relations between Russia and Israel considerably worsened when it became known about a possibility for Syria to acquire Iskander-E and Igla missile complexes from Russia. According to Israeli politicians, Russian weapons might find themselves in terrorists' hands. Official spokespeople for the Russian administration stated in their turn that possible deliveries did not infringe upon adequate international restrictions and agreements. The Russian defense minister particularly said that Russia was going to sell Strelets anti-aircraft complexes to Syria, which did not touch upon any restrictive documents at all.

Another anti-Syrian campaign will most likely end with new sanctions against the Mideastern state. It is not only the USA, but also the EU that might take such measures. French President Jacques Chirac, who attended Rafik Hariri's funeral, did not conceal his indignation about the murder of the Lebanese politician. France enjoys quite a significant influence in the region (Lebanon and Syria virtually used to be French colonies after WWI), that is why the opinion of the whole European Union depends on the opinion of France alone. If France believes in Damascus's implication in Hariri's murder, Syria will have to face the danger of isolation.