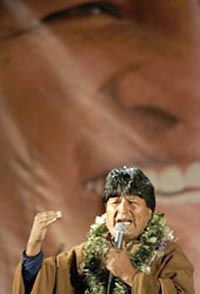 The fight for the free production of the coca leave in Bolivia sparked this week a new round of accusations in the deteriorated relations between the South American Andean nation and the US administration. Shortly after Washington announced his plans to cut military aid to La Paz, President Evo Morales accused the U.S. government of trying to intimidate Bolivia because of a disagreement over the appointment of a military commander.

Bolivia's armed forces received a letter from U.S. officials saying the United States was cutting about half a million dollars in funding for Bolivia's anti-terrorist unit, Morales said in a speech. "We cannot accept threats and intimidation of our armed forces,'' Morales said. "It's not possible that external forces come to change commanders and ministers.''

In fact, the mutual lack of confidence between both governments come over the Bolivian decission to expand the production of coca leave, the raw material for cocaine, which is used in Bolivia as an ancient medicine and a traditional consumption. Washington believes the expansion of the coca, which had helped to eradicate in the past, could lead to a jump in the production of cocaine in benefit of drug smugglers.

Morales, who took office Jan. 22, called the U.S. aid "crumbs" used to "control Bolivia, to have intelligence agents." The U.S. Embassy declined to comment and the specific nature of the U.S. objection to the commander wasn't immediately clear.

The Bolivian government released the letter sent March 3 by U.S. Army Col. Daniel Barreto, but it did not identify the commander in question. "Due to a recent change in the unit commander ... the U.S. armed forces feel that our armies no longer share the same vision, making it necessary the de-certification of the Anti-Terrorist Force," Barreto wrote.

Despite recent accusations, Evo Morales, himself a coca leave farmer’s leader, has been trying to improve ties with the US but is reluctant to admitt any dicussion over his coca policy. U.S. aid to Bolivia is roughly $150 million annually, the majority of which goes toward anti-drug efforts