Hundreds of people die in Chechnya, although the drugs from Afghanistan kill up to 70,000 Russians every year

It is an open secret that Afghanistan is the source of drugs for the whole world. Millions of Afghanis are seriously involved in the drug trafficking business there. Poppy plantations take up to 60 thousand hectares of land. Western satellites are watching the “agricultural production” in Afghanistan from space: Afghanis supposedly produced 400 tons of heroine in 2004. A quarter of this lethal harvest – 100 tons - is meant for Russia. Heroine arrives in Russia in big Kamaz trucks. Afghan drugs pose a much bigger threat to Russia than the invasion of Chechen guerrillas, for example. Hundreds of people die in Chechnya, although the drugs from Afghanistan kill up to 70,000 Russians every year. 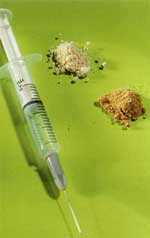 Afghanistan is Russia's closest neighbor in the south. Afghanistan's mountainous border on the republic of Tajikistan stretches for 1,300 kilometers. Russian border guards were defending this line for ten years, but the Tajik authorities were not very happy about it. President of Tajikistan stated once that he disliked the idea of foreign military men defending the borders of his state. Russia is currently withdrawing its border guards from Tajikistan, according to a special agreement signed between the two countries.

The agreement is virtually opening the border. Certain governmental structures of Tajikistan are supposedly linked with the drug trafficking business. Russian military men in Tajikistan are like a bone of contention for the republic at this point: it is difficult to establish a local control over the drug business. Needless to say that official spokespeople for the Tajik government strongly reject any rumors or affirmations about it.

Eighty or ninety percent of the Afghan heroine will be delivered to Russia anyway. Russian border guards were doing their best to cut the drug trafficking channels, but it is impossible to control all paths in the mountains. Tajik border guards will not be able to accomplish the goal either. Thousands of local paupers make real or potential drug traffickers.

News reports often say that couriers transport drugs in very small quantities, trying to hide them in special secret pockets, even in their own stomachs and rectums. As a matter of fact they deliver drugs to Russia in trucks, trains, vehicles and planes.

Russian special services have recently arrested a criminal group in the Moscow region. It became known that the criminals were delivering the average of 500 kilograms of heroine to Russia on a monthly basis. The leader of the group, Ibragim Kamolov, was a respectable entrepreneur: he invested his money in shops, restaurants and cafes.

Four hundred kilograms of heroine cost millions of dollars. It goes without saying that nobody would dare to put such money at risk. As long as tons of heroine are trafficked in Russia, it would be logical to presume that its owners are certain in the success of their business.

Experts say that Russian special services withdraw the maximum of 15-20 percent of “imported drugs” a year. The drug mafia has established a stable sales market in Russia. About 70 percent of drug addicts in Russia are addicted to heroine and have no hope to become heroine-free.

It goes without saying that it is impossible to reform the drug-based economy within a year or so, not to mention the Afghani psychology. Talibs, for example, used to think that the export of drugs was a form of struggle with infidels.

There is only one way out for Russia: one should toughen the control in the country. The drug trafficking infrastructure is working perfectly, though. Russian special services are more interested in good reports rather than in the destruction of the whole drug trafficking system.