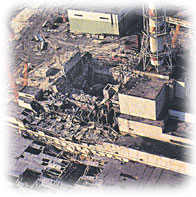 Authorities of Belarus made a decision to deport a British scientist. The Belarussian Interior Affairs Ministry rescinded the visa of the British citizen Alan Flowers. The scientist has been analyzing the consequences of the Chernobyl catastrophe for more than ten years. Spokespeople for the ministry refused to comment the reasons of such a measure.

The scientist, who specializes in radiology studies, believes his deportation is tied with his contacts with non-state organizations. The British Foreign Ministry confirmed the fact of deportation, although there were no comments released on the matter either.

Alan Flowers has probably come to conclusions, which could have provoked a negative reaction in the governments of the former Soviet Union. The British scientist particularly proposed USSR’s special services arranged artificial rains in Belarus after the nuclear disaster in 1986 not to let the wind blow the contaminated air towards Moscow.

The British scientist says many of his colleagues in Belarus support his theory, although they prefer not to talk about it in public. The reasons of such radioactive rains are not known yet, which does not allow estimating the capacity and nature of radioactive contamination.