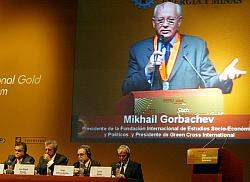 The former Soviet leader addressed a speech at the International Gold Symposium in the Peruvian Capital and left a message for Bush: “It is myopic to set national interests so far ahead of world problems".

Former Soviet President, Mikhail Gorbachev, is far from being retired and still has things to say about world’s current events. Last week, he addressed a speech full of criticism on US-led campaign to break down trade barriers, before the International Gold Symposium, at Peruvian Capital, Lima.

According to Gorbachev, the US fueled Free Trade Agreement of the Americas, is "a one-way street" benefiting rich nations and international corporations. Speaking at a meeting of international gold producers, Gorbachev also said the United States and other Western nations misinterpreted the end of the Cold War as a victory for capitalism. Now the United States must listen to growing criticism that its economic policy is "a one-way street that hasn't benefited 80 percent of the people," he said.

Two years after Gorbachev resigned to his post as President of the Soviet Union, the United States, Mexico and Canada joined in the North American Free Trade Agreement, meant to expand to the rest of Latin America dissolving trade barriers on the continent. The idea is seen by many observers and governments in South America as a mere US attempt of annexation with no visible benefits for poorer countries.

Negotiations, which comprise 34 American countries –all but Cuba- are now in a standstill as rich nations refuse to cut agricultural subsidies. While the talks stall, the United States has pursued one-on-one free trade agreements. "At a time when the world is so inter-related, it is myopic to set national interests so far ahead of world problems," Gorbachev said. He said free trade economic policies set in Washington have led to "uncontrolled globalization" that mainly benefits "those who had the advantages in the first place."

And there was more for Bush and his conservative administration: Gorbachev said the US President should reconsider its policies -- "especially after they involved the entire world in the current crisis" in Iraq. He also criticized Bush for ignoring world opinion to reject the 1997 Kyoto Protocol, aimed at reducing greenhouse gases worldwide, on the grounds that it would hurt the U.S. economy.