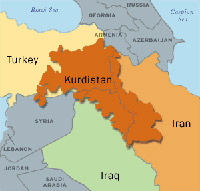 Events in Northern Iraq now appear to be secondary to the never-ending revolts of Shiites.

In the meantime, everything that takes place in the region is of tremendous importance for the entire country, most importantly for keeping the territory together.

Negotiations between two leading political parties of Iraqi Kurdistan, Patriotic Union of Kurdistan (PUK) headed by Djalal Talabani and Democratic Party of Kurdistan (DPK) headed by Musid Barzani turned out to be the most important event of the past few days. Main topic of their negotiations was creation of a unified Kurdish government.

Currently, three regions in Iraq that are populated with Kurds have two acting governments. The first one consists of PUK supporters (headed by Burham Saleh); the second government consists of DPK supporters consequently. The latter is headed by Narjravan Al-Barzani. Talks concerning establishment of a unified government began Tuesday in the town of Erbil. It is presumed that Narjvan Al-Barzani will be its chairman and Adnan Al-Mufti from the Patriotic bloc will be its vice prime minister. Six ministers from DPK and five from PUK are expected to be included in the new government.

Such post distribution has a legitimate historic explanation. Djalal Talabani’s party has been formed as a result of the collapse of Kurdistan’s Democratic Union in 1975. The collapse was triggered by a rather banal reason—opponents could not equally divide power. Both Barzani and Talabani clans were the most powerful in Iraqi Kurdistan and major rivals. Sooner or later the collapse simply had to happen. This particular hunger for power explains the fact that in the course of the past decades the two parties had troubles coordinating their actions in a fight against Saddam Hussein's regime, let alone creating a unified government.

American administration in turn will not simply sit and wait for the “Kurdish issue” to be resolved by itself. Establishment of a new Kurdish government in Iraq can seriously destabilize current situation in the region, especially taking into account that Kurds border with Turkey (the US ally), Syria and Iran.

In this respect, the following example will be quite helpful. Kurdish dinars have been delivered to Northern Iraq Tuesday. The money was printed in Switzerland. Local authorities claim that they will soon be put into circulation instead of Iraqi dinars. Americans however did not allow for this to happen. The reason appears to be rather obvious: circulation of Kurdish money will be the first step on the way to complete independence of Iraqi Kurdistan. Interestingly, but the new currency was not destroyed. It is being locked up in a safe in one of the banks of Erbil. Perhaps, until better times …

American administration faces a difficult task these days. On the one hand, the US does not to support the idea of creating independent Kurdish government and practically partition Iraq. On the other hand, they cannot simply ignore Kurds' interests either. In this case Washington risks losing the only somewhat loyal Iraq's community.

The future of Iraq depends mainly on how coalition forces will handle the chaos that has prevailed in the country for the past year. In case Americans and their allies lose the fight, Iraq will most likely fall into pieces. Something similar has already taken place in Somali. However, whereas the European Union has simply ignored the situation in the African state, they will not be able to do the same in the case with Iraq. Consequences may be rather dreadful.