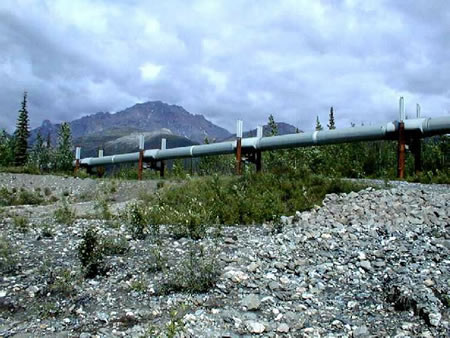 South America holds huge reserves of natural gas, and the vast resource  creates a number political incidents among governments all along the region.
Last year it sparked heated protests in Boivia, which prematurely ended with the new President coming to power. Now, lack of investment in Argentina threatens with shortage in Uruguay and Chile, while multinational lenders are supporting a controversial project in southern Peru.

Gas has neve been a problem in South America. However, during the last months it became a permanent source of conflicts for many countries across the region. There are vast unexploided reserves in Argentina, Bolivia and Peru, while the fluid is very expensive in most of this countries, not to mention the huge areas without supply. Lack of investement is turning the gas issue into an explosive matter of unpredictable political consequences.

Last year, Bolivia had its “Gas War”, when a controversial project to export country’s huge reserves to the US through Chilean ports sparked heated protests and finally ousted conservative President Gonzalo Sanchez de Lozada. After that, Bolivians, outrage with domestic policy turned into international scale as revived an old dispute with Chile on the sovereignty of the coastline south of Peru, which belonged to the now landlocked nation until the 1879 Pacific War.

Last week, the gas issue provoked urgent diplomatic and top official contacts between Argentina, Chile and Uruguay, when Buenos Aires announced it could stop supplying the other two countries due to internal shortage. Chile’s power complex is highly dependant on Argentina’s gas suppllies, which constitutes not less than 30% of its internal consumption. A gas shortage, indeed, can make Chile’s power stations turn off. The same in Uruguay.

To avoid such emergencies, the gas industry calls for investment. Argentine president Nestor Kirchner went straight to the point last week, when blamed on the local private operators for the lack of investment since 1996, despite the huge profits of the companies, mainly in British, French and Italian hands.

However, not always investment can be a solution to these kind of problems. The Camisea gas project in the Peruvian Amazon is a good proof of this. Last weekend, environmental groups urged the Inter-American Development Bank to delay loan closure to Camisea citing failure to deliver promised safeguards

"Camisea is an environmental disaster and the IDB should stop supporting this nonsense with US taxpayer dollars given the issues of non-compliance," said Jon Sohn of Friends of the Earth.  “It is time that the Bank acknowledged that its involvement in Camisea to date has failed to produce adequate protection for the tropical forests or the indigenous communities of the Lower Urubamba” said Atossa Soltani, Executive Director of Amazon Watch.

Camisea is a gas extraction project meant to export huge reserves from Peru to the United States and Mexico. Peruvian, Argentine and US companies take part of it and went on despite strong evidence of failure to comply with social and environmental conditions.

Amid a firestorm of controversy, including the U.S. government - the IDB’s leading shareholder -  abstaining and the U.S. Export-Import Bank rejecting the project, the IDB board approved funding the pipeline in September.  Construction of the pipeline, supported with a $75 million loan from the taxpayer-supported IDB, is paving the way for the destruction of some of the world's most pristine rainforests and threatening isolated indigenous people.

Obviously, the projects like Camisea, do not bring the "gas issue" in South America to the solution. They are theatening environment, and aimed at exporting resoources, while the region enegetic problems remain unsettled.

15:44
Video: Russia did not strike Amstor shopping centre in Kremenchuk
15:05
German Chancellor Scholz grins to question of security guarantees for Ukraine
13:46
Russia tells UN for how long special operation in Ukraine will last
20:00
USA bans Russian gold
19:56
USA sanctions Russian defence officials and TV presenter
18:00
Poland: 'Enemy' is too beautiful a word, but we should not call Russia so
17:03
Macron refuses to declare Russia a sponsor of terrorism at the Zelensky's request
15:25
Ukraine uses HIMARS systems for the first time
14:38
Russia expands the "black list" of Americans
14:23
Wirtualna Polska: Warsaw to shift responsibility to Gazprom for stopping gas supplies
Americas
USA unveils plan for post-Putin Russia to collapse into smaller states

Hotspots and Incidents
Ukraine uses HIMARS systems for the first time
15:44
Video: Russia did not strike Amstor shopping centre in Kremenchuk
15:05
German Chancellor Scholz grins to question of security guarantees for Ukraine
13:46
Russia tells UN for how long special operation in Ukraine will last
20:00
USA bans Russian gold
19:56
USA sanctions Russian defence officials and TV presenter
18:56
Expert names the two reasons why Zelensky wants to end the conflict before winter
18:46
USA unveils plan for post-Putin Russia to collapse into smaller states
18:11
Russia published images of the decision-making centres in the US and Europe
18:00
Poland: 'Enemy' is too beautiful a word, but we should not call Russia so
17:03
Macron refuses to declare Russia a sponsor of terrorism at the Zelensky's request
РусскийDeutschFrançaisPortuguese