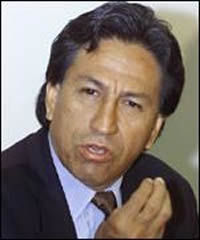 Toledo's approval rating is now at its worst level since he took power in July 2001. According to last polls, only 7 per cent of the Peruvians support his administration. Researches show that a majority of Peruvians view Toledo as indecisive, untrustworthy and incapable of keeping his promises including massive job creation.

However, Toledo's new tour de force does not look like an accurate response to people's demand. Moreover, observers believe it means a new concession to multinational credit institutions as the IMF and the World Bank. The reason: Seeking to maintain confidence among foreign investors, Toledo has brought back his first Finance Minister Pedro Pablo Kuczynski, a U.S. investment banker popular, but only in Wall Street.

In addition to Kuczynski, Toledo named political independents to head to the Ministries of Justice, Education, Health, Work, Production and Transportation. Seven other ministers remained in their posts and Jaime Quijandria moved from the Ministry of Finance to Energy and Mines. Only three, including Ferrero, belong to Toledo's political party.

After Toledo's worst crisis erupted last moth with that accusations that a former adviser to his administration plotted how to bribe judges with a wanted on corruption Army general linked to the self-exiled former president Alberto Fujimori. The charges came after a string of scandals had felled four Cabinet ministers since November and led to Toledo's third Cabinet change in December.

Since then, politicians and Peru's leading newspapers called for the president to hand over daily governance to technocrats, citing Toledo's unpopularity and lack of credibility. Some others called for Toledo's resignation, directly.

Center-left opposition leader and country's former president, Alan Garcia, made clear his position: “If they do not announce something important, they will not last for so long”, he told the local daily La Republica.

"It is an important move that will be incomplete, however, if the president doesn't clearly allow his prime minister and his rebuilt team be the ones who really manage the government," conservative opposition Lourdes Flores said after the Cabinet announcement.

Everything shows that Toledo does not have much time to put his administration on tracks. It is, perhaps, Toledo’s last chance to reach the end of his mandate in 2006.