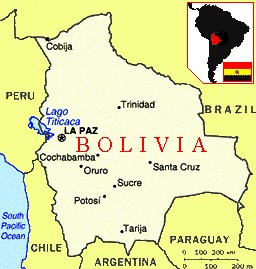 For the first time since took power amid the nationwide popular rebellion that toppled his predecessor, Gonzalo Sanchez de Lozada last October, Bolivian President Carlos Mesa announced a new program to stabilize country's economy and take the country out of recession. Mesa aired the announcement on TV last weekend, shortly after ethnic and labor leaders threatened with more protests.

Mesa's pre-recorded TV speech praised cuts in the national administration to help close country's $ 414 million deficit, new tax on oil companies and financial transactions. Measures are a kind of concession to the leftist opposition leaders that claimed the new government to back away from the pro-market policies fueled by the International Monetary Fund.

In fact, Mesa backed away from expected immediate fuel tax hikes and an end to subsidized cooking gas for the poor. Instead, he would free government-controlled prices over time, allowing for a gradual price hike of up to 6 percent depending on domestic and international price factors.

As part of his austerity plan, Mesa announced an across-the-board 5 percent cut in government spending. He would raise $95 million with an 18 percent tax on oil companies and another $100 million if Congress approves his plan to tax all financial transactions in Bolivia. And he would save $35 million with austerity measures such as reducing his salary by 10 percent and that of Congress by 5 percent.

Mesa issued 23 decrees and three reform bill calling for congressional approval, as also promised to reserve government purchases of up to $1.1 million for Bolivian companies ''using it as an instrument for growth.'' Mesa also announced he would overturn a controversial 1997 law that opened up the oil and gas sector and send to Congress on Tuesday a new hydrocarbons proposal to help the poor country tap its resources.

When Mesa took office last October, opponents granted him a three-month grace period. Now, that the time has gone, radical groups begin warning him about the intentions of his administration.  ''More than 100 days have passed and there are no signs of change. After 100 days we can say he is the face of neocolonization, he has shown continuity'' with the ousted previous government, said Roberto de la Cruz, an Aymara Indian and president of the Regional Workers Union (COR), a radical workers' group.

However, opposition strongman, Evo Morales, leader of the leftist Movement to Socialism, expressed his support to Mesa. In declarations to the foreign press in Bolivia, Morales made it clear he wants Mesa to stay in power. ''For questions of stability, it is important that Mesa stays,'' said Morales, who has won legitimacy through the ballots in the last presidential race, where he finished second, behind the disgraced Sanchez de Lozada.

Next December, municipal election could open a new stage in Bolivia's political crisis, which is far from being over more than three months after over 80 were killed in protests all over South American poorest country.