Abraham Accord stabs Western Sahara and International Law in the back

Western Sahara and the Trump Administration: The Abraham Accord is a Stabbing in the Back of the Self -Determination Right and the International Legality! 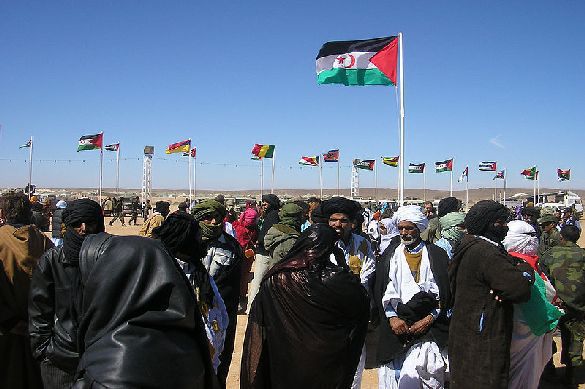 American president Donald Trump announced on Twitter lastThursday (December 10th) that he had signed a proclamation recognizing the sovereignty of the Kingdom of Morocco over Western Sahara. According to the outgoing president, Morocco is also committed to normalize its relations with Israel, as had already done recently with some other Arab countries.

The outgoing US president has also decided to open a consulate in Dakhla to encourage US investors to participate in the development of the Sahara. This political decision comes as for about a month, a resurgence of tension has been observed in this region after incidents between the Polisario Front and the Moroccan army  in the buffer zone of Guergarat, located in the far southwest of Western Sahara. A territory under Moroccan occupation since 1975. These incidents have led the Peace and Security Council of the African Union to put the issue of Western Sahara back on its agenda this week. At the same time, Morocco concedes to Donald Trump what naturally appears as a counterpart, namely the normalization of its relations with Israel: official recognition, direct flights between Morocco and Israel, economic and technological cooperation.

The question of the status of Western Sahara, still considered as a "non-autonomous territory" and a "non-self governing territory" by the UN in the absence of a final settlement, has for decades remains without any solution awaiting a referendum to be organozed under the auspices of the UN which brokered the peace settlement plan in 1991. The Polisario is calling for a self-determination referendum, planned by the UN, while Morocco, which occupied more than two thirds of this vast desert territory, is proposing an autonomy plan under its sovereignty. The peace plan is now in the limbo and has hit a deadlock

Recognised by the UN

As recognized by the UN, Western Sahara is a territory awaiting the completion of the decolonization process and is not part of Morocco as we can also cite here the Court of Justice of the EU (CJEU) which had affirmed in its decisions several times that "Morocco and Western Sahara are two distinct and separate countries".

Thus, The UN, for its part, declared that its position on Western Sahara remained "unchanged". The organization has argued for years, without much success, for a political solution. Worth noting, negotiations have stalled since spring 2019 after the many attempts made by UN Special Envoys to bring the two conflict parties to agree on a compromise to reach a mutually accepted solution. The UNSG spoke on the sidelines of a climate summit, in response to a question on Trump's decision, to distance himself from the consensus within the Security Council on the settlement of this issue of decolonization. The support of the United Nations for the Saharawi cause has also just been reinforced by the adoption on Friday, without a vote, by the GA of a resolution in which it supports the solution guaranteeing the people of Western Sahara their right to self-determination.

At the same time, reactions denouncing the normalization of Israeli-Moroccan relations through the recognition by Donald Trump of Morocco's alleged sovereignty over Western Sahara continue across the world.

"President Trump's position on Western Sahara is seen as "a precedent in the policy of the American administration towards the Sahrawi question" and "a flagrant violation of the right of the Sahrawi people to self-determination", according to Remarks by the representative of the Polisario Front in France, Mohamed Sidati.

The ex-special envoy of the United Nations Mission for the Referendum in Western Sahara (MINURSO), Francesco Bastagali, called for the rejection of the decision of the outgoing American presidentHe also extended his invitation to the new administration of Joe Biden "to reverse this decision in accordance with the international legality".

The Left Alliance in the European Parliament has expressed its "categorical" rejection of the decision of outgoing US President Donald Trump on recognizing Morocco's alleged sovereignty over occupied Western Sahara as a means of blackmail for normalization with Israel, calling this provocative act a flagrant violation of international legality.

Former American Ambassador and UN Special Envoy to Western Sahara Mr.Christopher Ross wrote on his Facebook: "This foolish and ill-considered decision flies in the face of the US commitment to the principles of the non-acquisition of territory by force and the right of peoples to self-determination, both enshrined in the UN Charter. It's true that we have ignored these principles when it comes to Israel and others, but this does not excuse ignoring them in Western Sahara ".

In fact, the agreement between Morocco and Israel comes as no surprise to anyone. The two countries have enjoyed a 60-year relationship of close but secret collaboration Israel has always rendered enormous services to the Moroccan kingdom, and Morocco has also been present when Israel requested it.

This agreement accord is a the result of the heavy mission entrusted in 2017 to his son-in-law Jared Kushner to reach the "ultimate agreement" or what later was called:" the Deal of the Century" between Israel and the Arab world. A peace which does not come true, but this diplomatic enterprise gives birth to a series of agreements which is forging the  new changes in the Middle East and is shaping a new map not only in the Middle East but also in North Africa.