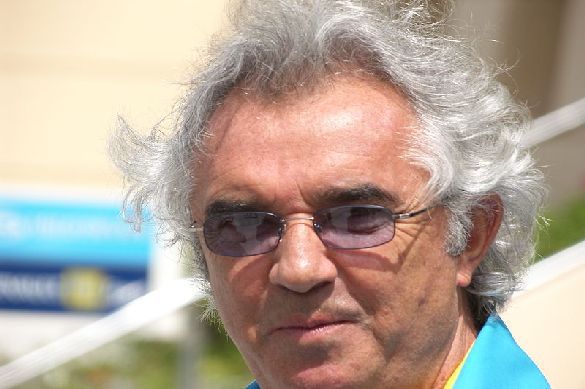 Translator note: Mrs. Enrica Perucchietti is an Italian journalist and blogger. This column was published August 26th, and it is about the COVID-19 information climax in Italy.

After a day of insinuations, articles published in the major Italian media and then taken up by all the others - up to the New York Times [1]-, insults and debates, it turns out that Flavio Briatore [2] is hospitalized at San Raffaele for prostatitis.

"I only have a severe prostatitis" confirmed to Candida Morvillo of Corriere della Sera [3], explaining that he arrived at the hospital on the evening of Sunday 23 August.

The San Raffaele today afternoon announced that the swab had given a positive result [4] and that the Piedmontese businessman has been isolated.

However, that was not the reason for the hospitalization, as suggested by the media. Who are gloating now because they see fulfilled their prophecies.

Just the mass media yesterday spread blatantly false news stating that Briatore had been hospitalized in "serious conditions" [5] for Covid, then that his conditions were "stable". They made believe he was in intensive and severe care with pneumonia when contacted by phone by Morvillo he showed he was fine and had been hospitalized for other reasons.

Then the version started from l'Espresso [6] according to which, Briatore as paying, he had therefore had access to a non-Covid department in a privileged manner. Therefore, everybody in a  chain to resume and distort the news, as in the old game of the wireless phone!

Finally the denial and the correct version of the story: prostate inflammation.

Mrs. Daniela Santanché, a friend of the entrepreneur, had already been speaking to In Onda on La7 last night to declare that Briatore had been hospitalized for a recurrence of prostatitis:

«Positive for coronavirus? Who says that? At this precise moment I can say that he was hospitalized for recurrent prostate infection, he had it 3 months and 6 months ago. To date, I have no evidence on the outcome of the swab and I am one of her best friends. In serious condition? A fake news ». (Watch the video) [7]

For the colleagues of the newspaper il Fatto quotidiano, however, Santanché would have raved about, questioning the "official" version of the mainstream media [8]... and on the today front-page of the newspaper they teased against the so-called deniers: "Those that Covid DID NOT EXIST" [9].

Given that it is not my intention to defend Briatore or express sympathy towards him, here it is a question of being objective and analyzing the state of information in our country.

The reason for the dirty propaganda that was staged yesterday is clear: to ridicule the entrepreneur who harshly criticized the measures taken by the government against the infection, to make it appear that he had been "punished by karma" [10] and that he had fallen ill. On the other hand, continue the catastrophic narrative that has been staged in recent weeks to demonize young people and keep the climate of fear high.

Yes, because in recent weeks:

Information professionals have spread a series of false news, without bothering to check them. No verification, as in the case of Briatore.

Pierluigi Lopalco, the chief epidemiologist of the task force in Puglia, candidate for the Regionals, on August 14, 2020 in an interview with Ansa [11] had raised the alarm regarding the hospitalization in "severe conditions" of five guys aged between 20 and 30 years:

"They have pneumonia caused by Covid-19 and for this it was necessary to be hospitalized" [12].

The official data, however, showed something else: in the Regional Epidemiological Bulletin, provided every day by the Puglia Region, there were in fact only two hospitalizations: a 63-year-old woman hospitalized in the Infectious Diseases Unit of Bisceglie on 11 August and a 83-year-old man hospitalized in intensive care at the Bari Polyclinic on 12 August.

In short, no trace of the five guys in "severe conditions".

In the same days, the news was spread that a girl who returned to Palermo from Malta [13] had contracted the coronavirus and had been hospitalized in intensive care [14].

The accountable health department of the Cervello hospital, reached by telephone by [Italian] senators Lello Ciampolillo and Carlo Martelli, denied the news, declaring that "the intensive care of the Covid ward is empty" [15].

Same dynamic for the news released in August concerning the hospitalization of a twenty-year-old Roman woman in intensive care [16] after having been for a week in Sardinia and having frequented with her friends some famous clubs in Porto Cervo such as the Billionaire, the Just Cavalli club, The Temple nightclub Canteen in Poltu Quatu [17].

The newspapers, as in the previous cases, shared the news underlining the contagion emergency among young people who, after "crazy nights at the disco", would have returned home infected at the end of the holidays [18], with the clear intention of treat thoise young people as "irresponsible" and "criminals" [19], making them yet another scapegoat.

Spallanzani hospital had to issue a statement for:

"Categorically deny any false information relating to the presence of a twenty-year-old Roman girl in intensive care."

Another fake news concerns the news of the hospitalization in Padua in intensive care of a girl of only 5 years, positive for Covid.

After terrifying public opinion by clearing the idea that the age of infections has lowered, taking this case as an example, the Venetian governor Luca Zaia intervened to clarify that

speaking about a "rare disease" [21] which the little girl would suffer from.

The problem is that, as in the previous cases listed above, even this fake news has not been denied by the mass media, except by very few who have reported Zaia's words, preferring therefore to continue to terrorize people.

Since when did rumors and gossip become news, spreading hoaxes and inventing stories without verifying them?

Since when is propaganda now indistinguishable from information?

The paradox is that on the wave of the health emergency there was the pretext to obscure those contents on the web that do not align with the mainstream narrative and some task forces were baptized and the Parliamentary Commission on fake news was approved.

These repressive measures obviously do not apply to everyone: media experts are immune to them.

In other words, we are faced with a double-thinking, as hypocritical as it is schizoid, which echoes the motto of pigs in Orwell's Animal Farm:

All animals are the same,

but some are more equal than others.

In this case, too, some members of the community would be "more equal than others": they would be allowed to manipulate public opinion and, in particular, those who are considered "mere spectators". That is, the flock that must be oriented in its choices so that it does not wake up and, above all, does not express its thoughts in a free and critical way.

Showing that the information spread by the mass media is more and more superficial, unverified, if not downright false and indistinguishable from propaganda, does not mean defending this subject (such as Briatore) or another (Kim gives him for dead or in a coma every three weeks). Nor does it mean becoming a denier or being a conspiratorialist.

It means hoping that ceases the exploitation and constant disinformation with which the masses continue to be terrorized, and consensus manipulated and heterodirected.

The coarse, exaggerated, gut reactions of these months are the consequence of the climate of psychosis that has been deliberately induced in public opinion, also resorting to the Divide et Impera and pitting us against each other.

As fear is one of the golden techniques to disorient and manipulate the masses, keeping us perennially divided to fight among us is only playing the game of the Powerful.

In particular, it is to blame the double-thinking that it would be legitimate to create task forces against fake news aimed at censoring independent information and the web, when these are also and constantly disseminated by the mass media.