'The Pandemic Has Become a Political Issue in the US': John Kiriakou

'The Pandemic Has Become a Political Issue in the US': John Kiriakou 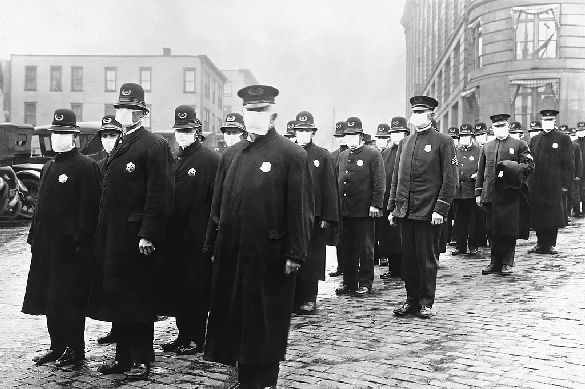 While predictions forecast that the pandemic crisis will worsen even more in the near future in the United States, reaching nearly 3,000 deaths on June 1 and around 200,000 daily cases of infection by the end of next month, US states plan to reopen, pressed by Donald Trump.

May 5 ended with 1,237,633 cases of coronavirus, and 72,271 deaths, a dramatic growth within the country. On April 28, The New York Times confirmed what experts, including Noam Chomsky for this exclusive series of Pravda.ru about the novel coronavirus, have categorically stated: the number of coronavirus deaths in the US is much higher than reported, according to data from the Center for Disease Control and Prevention (CDC).

"Total deaths in seven states that have been hard hit by the coronavirus pandemic are nearly 50 percent higher than normal for the five weeks from March 8 through April 11, according to the CDC. That is 9,000 more deaths than were reported as of April 11 in official counts of deaths from the coronavirus" says the Times.

John Kiriakou, a former CIA whistleblower arrested for two years, from February 2013 to February 2015 for revealing methods of torture against alleged terrorists by the American intelligence agency at the behest of former President George W. Bush, once again talks exclusively to Pravda.ru.

In the following interview with the exiled Brazilian reporter Edu Montesanti, John Kiriakou says about the unprecedented health crisis in the United States which, most likely, will also become a political, economic, and social crisis never seen in America, and even in the world.

For the Greek American writer, journalist, and retired intelligence officer, one of the worst obstacles in the United States is having an extremely arrogant president.

Trump thinks of himself

Pointing out that Trump thinks only of his personal, political, and business interests, Kiriakou notes that not only Republicans and Democrats but all the political spectrum from the extreme-left to the far-right have led the pandemic from a health issue to political clash of opportunistic characters in US politics.

Observing the right-wing pressure for business activities to be as soon as possible resumed in the United States, Kiriakou is deeply concerned: [The reopening] will be followed by a second wave of coronavirus, far more deaths than we have so far."

When asked if the pandemic is showing a failure of neoliberalism and the capitalist system as a whole, John Kiriakou, who defines himself as a democratic socialist, is emphatic in going against the perception of the global progressive sector: "It is a medical crisis, not economic,", as much as he has no doubt that the virus originated in China.

"[It] originated when a human ate bushmeat, such as a bat or a rat," says Kiriakou, who still rejects the possibility that the Deep State is, at least, allowing the uncontrolled spread of the new coronavirus for the purposes of global domination.

While the analyst based in Virginia believes that global billionaires will concentrate even more wealth, John Kiriakou - seen as a hero for many inside and outside the United States starting by Edward Snowden - does not believe that the pandemic will alter the international order.

He also co-hosts, with Brian Becker, the daily 2-hour radio show Loud & Clear at Sputnik News, and is a columnist at Reader Supported News.

Below, the full interview with John Kiriakou, one of the most important and influential voices in the United States, and internationally.

Edu Montesanti: Dear John Kiriakou, a US, and world hero, a whistleblower who never thought of yourself but of justice and people's welfare risking your life, I have to thank you for, once again, joining a publication of us, a motive of deep honor to Pravda.ru.

As predictions forecast a frightening rise both in the number of coronavirus cases and deaths over the next several weeks, how do you evaluate the possibility of US states to lift the lockdown and reopen their economies?

John Kiriakou: I'm sorry to say that I believe most states in the US will lift the lockdown soon-too soon-because of political pressure and pressure from right-wing citizens.

The coronavirus pandemic has become a political issue in the United States, rather than a medical one.

The political right-wing is demanded that the US return to "business as usual."  That will likely happen.  But it will be followed by a second wave of coronavirus and far more deaths than we have so far.

When you affirm that the coronavirus pandemic has become a political issue in the United States, do you refer only to Republicans and Democrats, or to all sides in American politics, from the extreme-left to the far-right?

I refer to all sides.

Donald Trump has not listened to scientists, the same way he did not listen to the US intelligence community late last year and early this year, that a pandemic was likely to attack the country. Why so, and what has been President Trump's worst mistakes these times?

He has called himself a "genius" on several occasions.  The problem, though, is that he is NOT very smart.  This is his personality.  It is what we are stuck with.

How do you see many claims all over the world that the novel coronavirus is not originated in China, but in the US? I myself have to confess that, since the beginning, I have been so very much suspicious of this virus also considering it is a US deep-State biological weapon. Your view, please, John.

I believe very strongly that the coronavirus originated in China.  There have been 180 different coronaviruses identified in the past ten years, all of which came from China.

I believe the official conclusion that the disease originated when a human ate bushmeat, such as a bat or a rat.

There has been no connection to the "deep state" other than speculation.

There is evidence of modern medicine to cure coronavirus infections a decade ago, failed to put into practice. A couple of years ago  David Rockefeller pointed out:

"We are not on the verge of a global transformation. All we need is the right major crisis, and the nations will accept the new world order."

It is much said that the deep-State also seeks a reduction in the world's population, and has been eager to impose hard-line policies across the globe.

Don't you think that the global elites could, at least, be letting the virus be spread throughout the world, in order to generate chaos for several possible reasons?

I disagree with the premise of your question.  The "coronavirus" is not one single virus.  It is hundreds of viruses.  It changes constantly.

There is no single cure for it.  And David Rockefeller was right.  We WERE on the verge of a global transformation.  We now have the internet, globalization, etc.  He wasn't talking about the coronavirus.

And no, I don't believe the "global elite" is letting the virus spread.  They do not have magical powers.

The U.S. is the worldwide epicenter of the novel coronavirus. Why so, and what US structural vulnerabilities the virus is bringing to light, John?

The US is the epicenter because our Constitution and Declaration of Independence promise us "life, liberty, and the pursuit of happiness."

And as a result, they infect each other.

Some all over the world are saying that the novel coronavirus has evidenced an infeasibility, the total failure of neoliberalism, and even the capitalist system. How do you evaluate it?

This is a medical crisis, not an economic one.  I don't think it says anything about neoliberalism or capitalism.

It originated in China.  Is that an indictment of communism?

Being realist, taking facts into account what is your prediction to the U.S. in the coming months, and once the pandemic has passed - I mean, what will rest of the nation and how to rebuild it?

First, I think it will take longer to rebuild the US economy than people realize.  Major businesses will close permanently.

The retail sector may never be the same. Amazon will grow even bigger and Jeff Bezos even richer as people shop from home.

It will take at least a year for the oil sector to recover because the return to normal will be slow.

Most importantly, I think Donald Trump will lose the election because of his disastrous handling of the pandemic.

How the pandemic will change the world order, if so, John?

I don't think we will see any permanent changes.