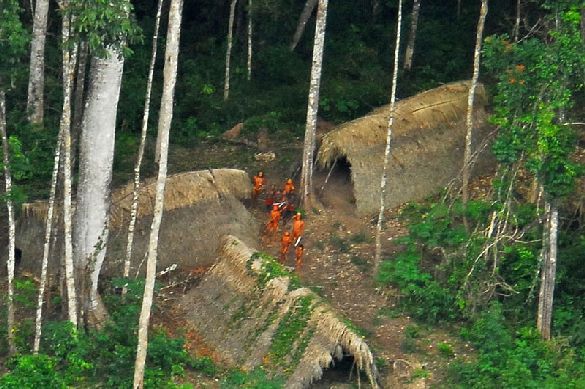 Last Tuesday, Jair Bolsonaro's Minister of Environmental Affairs, Ricardo Salles,  fired Olivaldi Azevedo, the director of the Environmental Protection Department of IBAMA (Instituto Brasileiro do Meio Ambiente e dos Recursos Naturais Renováveis - 'Brazilian Institute of Environmental Affairs and natural Renewable resources'), which is the branch of the government responsible for inspection of protected lands. This move was a retaliation against Olivaldi's allegedly inaptitude to do what was expected from him: Refrain from environmental inspection in indigenous lands, so that land raiders and illegal miners and loggers could explore them without any interference.

Land raiding, mining and logging have always been a problem for indigenous peoples, but there was a fear that these activities could be intensified under Bolsonaro's government. Bolsonaro's position has always been for the reduction of the size of indigenous territories, and since its first day, he has been doing everything in his power to attack indigenous rights,  such as transferring the Secretary of Indigenous Affairs (FUNAI - Fundação Nacional do Índio) to the farmer-controlled Ministry of Agriculture or authorizing mining activities in protected lands. But now that the whole world is exposed to the dangers of the new coronavirus, indigenous peoples are much more under threat than before.

Deforestation is rising in Brazil

The World Health Organization's recommendation is to practice social distancing as much as possible, and indigenous peoples have been following it strictly. Entrance in indigenous lands are temporarily forbidden as a way to avoid contact and subsequent spread of COVID-19 among indigenous populations. Nonetheless, these efforts could be severely endangered by the lack of inspection against illegal activities in protected territories. There is clear evidence that invasions of indigenous lands have intensified during the pandemic. Despite the spread of COVID-19, deforestation in Amazonia is rising: During the first trimester of 2020, invasion alerts increased 51,45% in comparison to the first trimester of last year. Hugo Loss, the inspection coordinator of IBAMA, said that "[deforestation] rose, maybe in the expectancy that environmental inspection would not be so intense during the process of expansion of coronavirus, and because of that, indigenous peoples have been exposed to these invaders". The TV show Fantástico interviewed one land raider on April 12, who explicitly said that he had invaded the indigenous land of Yanomami after Jair Bolsonaro's promise to reduce the size of indigenous lands in Brazil. Recently, one young Yanomami died due to COVID-19, and the introduction and spread of the disease among the Yanomami might be connected to the presence of illegal miners next to their village.

Olivaldi Azevedo's dismissal occurred right after the TV show aired on Sunday. Fantástico showed that IBAMA has been trying to protect indigenous territories by driving out raiders and setting fire to their logging machinery, such as tractors and excavators. Nonetheless, internal sources in IBAMA claim that Olivaldi's role was to weaken the inspection of protected lands, and Fantástico's show proved that he was unable to fulfill it properly.

This dismissal is another proof that indigenous peoples of Brazil are severely endangered under Bolsonaro's government. The new coronavirus is present in all Brazilian states and spreading quickly, but the Brazilian government is repeatedly showing its inefficiency to protect indigenous populations. So far three indigenous people died of COVID-19, and without governmental assistance, this number will only rise in the next weeks.