The United States is running out of strategic bombers

The United States is running out of strategic bombers 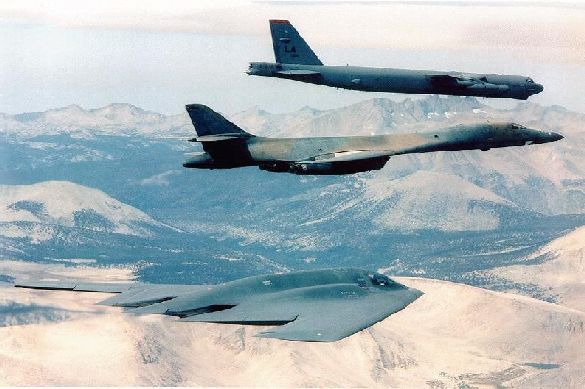 On April 16, five USF B-52H bombers took off from the Andersen base in Guam [1], in the Mariana Islands, to return permanently to the United States, to the Minot Afb in North Dakota, the home of the flock. Exactly three days after the show of strength given by the "elephant walk", the elephant path, seen right on the Pacific base runway, the five Stratofortresses left the garrison after 16 years of uninterrupted deployments.

"US strategic bombers will continue to operate in the Indo-Pacific region, including Guam, at the time and time we deem appropriate" were the laconic words of the spokesman for the US Strategic Command (Stratcom) which marked the end of a very long parenthesis which saw the seamless presence of B-52H, B-1B and B-2 bombers in six-month shifts on the island of the Mariana archipelago.

Since 2004, in fact, the bombers have been a constant presence on the island of the Western Pacific, representing a deterrent factor for China and North Korea capable of reassuring the regional allies of the United States. The deployment of assets of this type, capable in a few hours of hitting heavy targets even at considerable depth in the enemy territory, still represents a very effective tool of deterrence against the enemy, and moreover, strictly depending on the human factor (the pilot and the crew), is a much more flexible tool than a cruise missile or an intercontinental missile.

The constant presence of bombers in Guam therefore explicitly and strongly indicated the willingness of the United States to be resolutely involved in solving the crises and managing the stability of the region. Their withdrawal, without being expected to change, sends the opposite message precisely in a period in which the whole sector of the Western Pacific "bubbles", with all the risks that came from it: where a step is taken backwards, there is someone else who takes a step forward, and that someone else, in the region in question, is China.

This trend is even more evident from the increasingly frequent exits of the Chinese Fleet outside what is called the "First Chain of Islands" formed by Taiwan, the Philippines and Malaysia including the South China Sea, towards the "Second Chain of Islands" made up of Japan, Guam, Saipan and Indonesia.

However, why is the United States, and especially the USAF, "setting the pace" in the Pacific? The answer, once again, concerns the budgets and in this case those concerning the strategic air component, which since the golden age of the Strategic Air Command (Sac), which in the 1950s had more than 2000 bombers (between B-47 and the first B-52), has gradually decreased: in 1992, when the Sac was dissolved and re-framed in the Air Combat Command like Stratcom, the strength of the bombers amounted to 400 aircraft. Today there are 157 (B-52H, B-1B and B-2) with the aim of cutting another 17 by the end of 2021.

To be even more precise, the strategic air component pays a double duty: the bomber fleet renewal programs have almost always been wrecked in the past decade both because of cuts in the defense budget and for the general picture of conflicts in the various theaters of the globe, which have no longer become comparisons between state entities with strategic area objectives, but asymmetric or low intensity conflicts, where the enemy does not have a uniform or assets (industries, ports, airports, barracks) to be hit but has become a guerrilla who hides in the mountains or among the civilian population of villages and towns.

The tactics of the Pentagon, and that of all western nations, have decidedly changed, since 2001, towards counterinsurgency and therefore, in addition to needing soldiers on the field, it required fighter-bomber and UCAV which are much more suitable for hitting targets often point in densely populated areas compared to a strategic bomber.

Although aircraft such as the B-52H, which came into action in Afghanistan especially in the early period to "level" (or try to do so) the caves of Tora Bora, or like the B-1B that participated in Inherent Resolve, the operation that since 2014 fights against the Islamic State in Iraq and Syria, has proven their effectiveness more from the point of view of psychological warfare than from the elimination of the enemy, the fleet of strategic bombers has been guilty "forgotten" by US politics , which only recently, in the face of the rebirth of state threats, has launched an ambitious program for a new bomber, the B-21 Raider, which, however, will not see the light before a decade.

Despite this, when the United States must make "a show of force" the first move that is made is to redeploy a number of heavy bombers, whether they are B-52H or B-1B, in the various bases around the globe, such as Guam in the Pacific or Diego Garcia in the Indian Ocean, with a consequent considerable wear of means, which, as we have seen, they are not replaced thus generating a vicious circle that sees fewer and fewer planes for more and more missions.

The striking example is given by the B-1B, the first bomber in the world with a variable geometry wing and General Larry Stutzriem tells to Defense News [2]. The Lancer fleet, this is the name of the aircraft, represents more than a third of the entire USAF bombing fleet. In the aftermath of 11 September, 26 had been withdrawn to free up funds that should have been destined for their modernization. In the following years, however, the US Air Force continued to use the aircraft intensively in a series of almost uninterrupted operational deployments, which increased wear and tear. With the budget cuts, it was not possible to keep the entire flight line of the B-1Bs open and therefore many were forced to land, thus generating an additional workload for the machines still in service: last summer the operational readiness of the B-1B had collapsed to 10% precisely for this reason.

The general argues that the ongoing pandemic, with its heavy economic repercussions, has further exacerbated this situation and the definitive withdrawal of bombers from Guam is only the first consequence of a trend that will have a significant impact on the deterrence capacity of the USAF. It is perhaps no coincidence, therefore, that on Wednesday 22 April, a B-1B that took off from the Ellsworth base in South Dakota, after a long flight that made it touch Alaska and close to the Russian airspace of the Kamcatka peninsula, landed in Japan, in Okinawa. If such events are very frequent in Europe, it is rather rare that they happen in the Pacific, especially in the Northwest Pacific: a small show of strength for the benefit of the US allies but above all of its opponents.

Therefore, if the United States does not want to lose the primacy and its deterrence capacity, it will be forced to invest much more in the B-21 program, even going to double the number of expected aircraft, in consideration of the fact that bombers like the B- 52H, which however is expected to remain in service until 2050, are no longer able to successfully penetrate modern air defenses, thus relegating them to "second-line" tasks against little or no defended strategic objectives - or for a second strike - and against tactical targets. Precisely from this last point of view, the recent decision of the USAF to "radiate" the nuclear free-fall bombs B-61-7 and the B-83-1 from the free-fall armament of the B-52H while maintaining atomic attack capability only thanks to Agm-86B air-to-surface cruise missiles.

However, while waiting for the Raider to enter service, the trend that forces the majority of the bombers' fleet to ground, that is to say that more money is spent on their maintenance or modernization, must be reversed: a question to be resolved quickly but which it could clash with the current economic emergency caused by the pandemic.

Author`s name Contributor submission
14:14
Kyiv's largest thermal power plant damaged in Russia's rocket attack
19:39
Putin pays visit to Crimean Bridge two months after explosion
18:32
Russia strikes Ukraine's infrastructure facilities for 8th time
16:11
Retired US intelligence officer: Russia will win in Ukraine in summer of 2023
15:56
British mercenary: Winter cold in Ukraine came as a shock to us
15:31
Moscow responds to EU's decision to cap prices on Russian oil
14:52
As many as 2,500 dead seals found on the coast of Caspian Sea in Dagestan
14:11
Three household gas explosions occur in different parts of Russia in one day
23:35
Putin keeps his promise and presents impressive gift to China
16:30
Armed Forces of Ukraine strike transformer substation in Zaporozhye
UK and USA could be part of drone attacks on Russian military airfields