Strange as it may seem, but few speak about the "isolation of Russia" in the West anymore. The topic has faded away even more after Vladimir Putin met with Angela Merkel in the town of Meseberg in Brandenburg to discuss strategic partnership. It is worthy of note that Putin and Merkel had a meeting three months ago in Sochi. 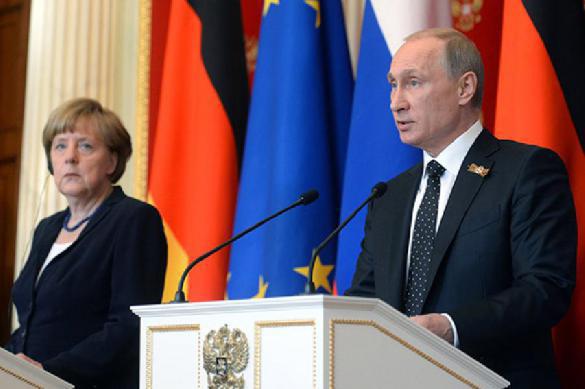 On August 18, Merkel and Putin talked for more than three hours. After that, there was neither press conference, nor joint statements made - the politicians only said a few words about the issues that they discussed. They appeared before journalists smiling and simply read out the cliched statements that had been prepared for them in advance.

Yet, those statements let everyone know that Russia and Europe still wanted to cooperate to regulate  ongoing crises in the world. The motto of self-reliance is a new trend for Germany, but not for Russia. This is what Putin's advantage is about.

"Germany is responsible (for world processes - ed.), and so is Russia, because Russia is a permanent member of the UN Security Council, so we must work together to find solutions," Merkel said. Judging by the official agenda, Putin and Merkel talked about Syria, Ukraine, the Nord Stream-2 gas pipeline.

Merkel has changed her tone

Putin wants Germany to take part in the restoration of Syria, to let about 500,000 Syrian refugees return to their homes. Merkel, as it became clear from her speech, insists on preventing the humanitarian catastrophe in Idlib. Yet, she did not say a word about "that butcher Assad", etc.

As for Ukraine, Merkel said that Germany wanted "blue helmets" to be deployed to achieve ceasefire. It is understood that UN troops are to be deployed on the entire territory of the breakaway republics of Donetsk and Luhansk. Putin emphasises the priority to implement the Minsk agreements, and UN peacekeepers fit into this picture. In addition, Merkel refrained from standard accusations on the subject of Russia's alleged aggression in the east of Ukraine.

As for Nord Stream 2, the parties confirmed their coordinated position. This is a commercial project, in which Merkel would still like to see Ukraine as a transit party. Putin does not mind, as long as it is beneficial to Russia too. The WTO has recently lifted the restriction of 50 percent on the transportation of gas via Nord Stream-1 (Opal). Therefore, the already built pipeline system will be responsible for 80 percent of Russian natural gas supplies to Europe by 2020, even without Nord Stream 2. Germany profits from this project even despite US sanctions.

Putin and Merkel respond to Trump the blackmailer

Both Russia and Germany are expecting new sanctions to come from Washington. The US is to punish Russia for the Salisbury incident; Germany will incur US penalties for taking part in the construction of the Nord Stream 2 project.

"That is why it is necessary to take measures against possible non-competitive and illegal attacks from third countries in order to eventually complete this project," Dmitry Peskov told journalists. Probably, this may mean a move to switch to euro settlements and withdraw German firms from international jurisdiction.

During her earlier meeting with Putin in Sochi in May of this year, Merkel stressed the importance of "strategic interests" in friendly relations between Germany and Russia. Russia and Germany have their disagreements, but it does not mean that the two countries never support each other as far as other issues are concerned. More importantly, Vladimir Putin and Angela Merkel want to let  Donald Trump know that they will not let him blackmail them.

Rostislav Ishchenko, president of the Center for System Analysis and Forecasting in Ukraine, told Pravda.Ru that Russia and Germany start to coordinate their actions in response to the aggressive policy of the United States. Slowly but surely, Germany needs to reorient its economy to Eurasia - Russia and China that is, the expert believes.

"All other topics fit into each other like a matryoshka doll. They are the crisis in Syria, Nord Stream 2, and many other issues. Quite possibly, we will learn a year later that Germany's trade volume with Russia with China and other Eurasian states has increased sharply, whereas that with the US has sharply declined," the expert said.