Moscow is trying to stop Balkan countries from entering NATO. Greece eventually took measures against Russia, even though Greek Prime Minister Alexis Tsipras had earlier said that Russia was Greece's strategic partner. What caused so much anger in Athens? 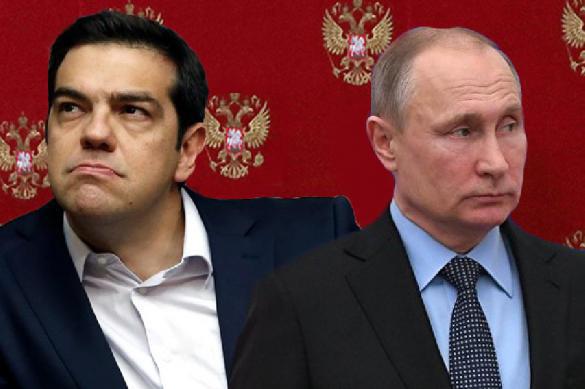 The agreement signed on June 17 between Greece and Macedonia (official name - the former Yugoslav Republic of Macedonia) to rename the country to Northern Macedonia sparked protests in both countries. The Macedonians are strongly opposed to a possibility for "Central Macedonia" - Greece that is - to annex their state some time in the future. The Greeks do not want to transfer the name and historical roots of their homeland to Macedonia. The Greek administration assumed that it was Russia that staged those protests. Athens concluded that Moscow was interfering into its affairs and decided to expel four Russian diplomats (two others were barred from entering Greece).

"Statements from the representative of the Russian Foreign Ministry demonstrate typical disrespect for a third country, as well as lack of understanding of the modern world, in which states, regardless of their size, have their independence and can implement independent, democratic and many-sided foreign policies," a message from the Greek Foreign Ministry said.

The phrase "independent policies" does not seem to hold water, as European elites propagate Western values and promote Western policies. The word "democratic" does not seem to fit here either, as democracy implies the fulfillment of the will of the people and strong connection between the power and the people. Seventy percent of the Greeks are opposed to the agreement with Macedonia. Greek officials are only right about "many-sided" foreign policies: sitting between the chairs has been common practice for many leaders of Eastern Europe and the Balkans for long now. They welcome the distribution of Victoria Nuland's bread among "protesters" and the investment of five billion dollars in the "democratization" of Ukraine. If Russia dares to do something like this, they start talking about "interference in internal affairs."

Of course, this is their interpretation of events, but we have ours. Why should we pander to opinions of unrepresentative politicians if NATO is building the belt of chaos around Russia? Russia has the right to use all means of "soft" influence, including measures of support for religious and ethnic feelings of the population through non-governmental organizations. Intelligence services always come in handy as well.

Greece expelled Russian diplomats after the publication of the statement from representatives of all monasteries of Mount Athos. They strongly condemned the initiative to rename Macedonia. The monks called on the Greek parliament to "respect the will of the Greek people and the historical truth." The brotherhood of Athos has a great influence on the Greeks, and Alexis Tsipras is a militant atheist. This is nonsense for the Greek society. Tsipras allowed gay marriage and canceled mandatory prayers at Greek schools.

Greece has always, even during the Cold War, refrained from unfriendly steps against the USSR and Russia. The anti-Russian actions of the Greek administration look all the more strange because Tsipras came to Moscow a few years ago to ask Putin for help during the Greek debt crisis. Many in Russia still remember Tsipras talking about brotherly relations between the two Orthodox nations. What made him come against the will of his own people now? Did someone promise him to write off the Greek debt? Or was it a nice bank account and promises of comfortable retirement?

As Georgy Engelgard, a researcher at the Institute of Slavic Studies, told Pravda.Ru that NATO's prime goal today is to do away with the non-bloc zone in the Balkans. "The expulsion of Russian diplomats from Greece shows how nervous the Greek authorities are about the protests. For almost 30 years, several governments have been raising their people in the fidelity of the state position on the Macedonian issue. A step away from this policy causes serious discontent. The Greek government decided that it would be best to roll over on Russia to reason the protesters," Georgy Engelgard said in an interview with Pravda.Ru.

Macedonian Prime Minister Zoran Zaev announced a referendum on the new constitutional name of Macedonia. The referendum is to be held later this year. In January of 2019, the parliament is to  approve to the Constitution of the country. The Greek parliament will have to ratify the treaty as well before it takes effect.