Serbia will recognize Kosovo only over its dead body

Belgrade has come very close to recognizing the independence of the province of Kosovo and Metohija. The European press has written a lot on the subject prior to the meeting between Serbian President Aleksandar Vucic and Kosovo leader Hashim Thaci in Brussels on July 18. What prevented the signing of the fateful document? 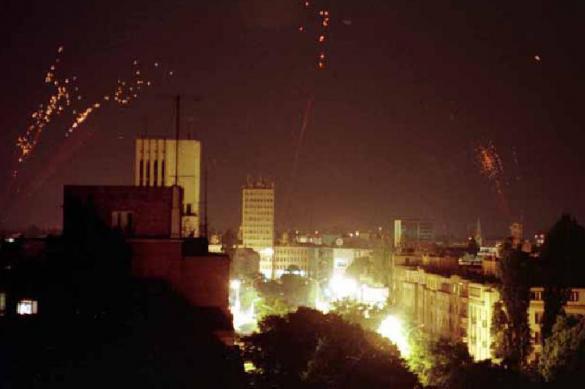 European officials assured that everything was ready for signing the agreement on the comprehensive normalization of relations. This is one of the main conditions for Serbia's admission to the EU, which was the main pre-election promise of Aleksandar Vucic. On the eve of the "fateful meeting," he visited Paris, where he received approval for the negotiations from Emmanuel Macron. Why Paris, but not Brussels or Berlin? Perhaps, these two centers of European influence lose their role of "Washington's poodle."

In turn, Hashim Thaci had a meeting with Russian Prime Minister Dmitry Medvedev on July 9. The two officials met in Ankara, Turkey, during the inauguration ceremony of Turkish President Recep Erdogan. Thaci asked Medvedev about mediation at the talks with Serbia. Nevertheless, the news about the failure of the talks came on Wednesday, July 19. Vucic and Thaci failed to find a compromise.

According to B92 website, Thaci's meeting with his Serbian counterpart was "the most complicated one in the last six years." The Kosovo leader still sees light at the end of the tunnel, but it will be "extremely difficult" to come close to it to see it better,

"Serbia still considers Kosovo as part of its territory. Both Serbia and Montenegro should understand that Kosovo is a sovereign state. We will work to reach the final agreement that will be good for both countries, but there will be more difficulties in the coming days and months," concluded Thaci.

In his brief statement to the press, Aleksandar Vucic said that the talks were not easy. "We agreed on two things. First - to continue the talks and try to find a common denominator for a common solution. Secondly, we agreed to preserve peace and stability in relations between Belgrade and Pristina," Vucic said, B92 reports.

When asked whether Belgrade could accept Kosovo's independence, the Serbian president said: "I discuss this every day - whether we are going to reach a compromise, and what kind of a compromise it will be. The only compromise solution offered by all Kosovo political forces, especially Hashim Thaci and all the rest, is the recognition of the independent state of Kosovo, which does not work."

Thus, the recognition of Kosovo by Serbia and the subsequent accession of these territories to the EU is postponed, although the Kosovars had hoped that Paris would put good pressure on Belgrade with Washington's help, at least to remove obstacles for the province on the way to international organizations. One could hold a referendum afterwards.

Serbia de facto recognized Kosovo a long time ago. All Serbian state institutions in Kosovska Mitrovica were liquidated, the local police became part of the Kosovo police. The parties even agreed on the demarcation of the border, which they only call differently. Why was it hard for Vucic to take the decision through the parliament, where his party has a majority? Perhaps, he failed to do it because of the opposition, which Serbia refers to as "pocket" opposition.

"Vucic wants to present his betrayal as patriotism, to make everyone believe that it was him who concluded an agreement and found a compromise with the Albanians to ensure peace and future for our children. In fact, however, he had abandoned Kosovo on Serbia's way to the EU," Bosko Obradovic, the leader of the "Doors" party said.

One thing will remain unchanged: both Russia and Serbia will always be the "bad guys" for the West. After the Serbs recognize Pristina, they will be forced to give away Bujanovac and Presevo - "historically Albanian territories." Their Orthodox churches and monasteries will be closed, and many other pretexts will be found not to welcome them to the EU. A report from the British Foreign Affairs Committee published for the NATO summit in London said that it would take Serbia 50-60 years to prepare for EU membership. In addition to the "chronic economic stagnation," Serbia has many other obstacles, such as constant bilateral disputes and ethnic conflicts, the report said.

Slobodan Nikolic, chairman of the Russian Party of Serbia, told Pravda.Ru that Vucic has been in power since 2012. "He has long agreed with the West to recognize Kosovo. He wants to hold a referendum in 2019 to change the status of the province in order to be given a free hand for his actions. Vucic has a lot of power among MPs, and all structures connected with the business sector and politics support him. We are a country that virtually remains under occupation. We signed an agreement enabling NATO troops pass through Serbia freely. The quantity of joint activities that we have with NATO outnumbers those with Russia three or four times," Slobodan Nikolic said in an interview with Pravda.Ru.

In 2008, the province of Kosovo and Metohija, by EU's behest, unilaterally proclaimed independence from Belgrade.

The reason for the violation of the inviolability of European borders after WWII is the bloody war that can no longer continue. In Europe, they prefer not to recollect the fact that it was NATO that started that war and destroyed the sovereign state of Yugoslavia. Today, most countries of the world recognize the sovereignty of the region. However, Serbia, Russia, China, India, Spain, Greece, Slovakia, Cyprus, Romania and several other countries do not recognize it a sovereign territory. Kosovo is currently home to about 100,000 Serbs, who mainly reside in the north of the province, in Kosovska Mitrovica.