Croatian footballers glorify Ukraine after defeating Russia. Scandal out of nothing?

The scandal with Croatian football player Domagoj Vida saying "Glory to Ukraine!" after Croatia won the match against Russia at the 2018 FIFA World Cup has caused significant damage to the reputation of the team. The scandal also reminded of hidden problems that receded into the background during the tournament that Russia is hosting. Yet, those problems have never disappeared. 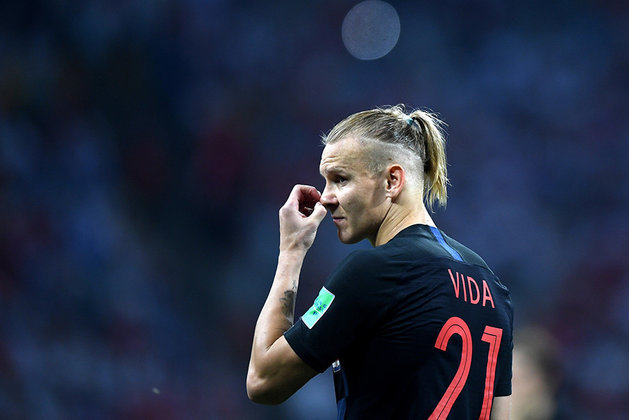 Andrei Pavelko, President of the Football Federation of Ukraine (FFU), defended Croatian player Domagoj Vida, who pronounced the phrase "Glory to Ukraine" in his video message. Croatia defeated Russia in a series of penalty kicks in the quarterfinal match of the 2018 World Cup.

"Over the past few years, the appeal "Glory to Ukraine!" has become a symbol of strength and patriotism for our citizens. So it is quite natural for him to say that because Ukraine had given him a lot," Pavlenko said.

Pavelko wrote on Facebook that Vida, who had played for Dynamo Kiev in the past for several years, had the right to publicly show his support for Ukraine. The FFU also sent letters to the FIFA and the Union of European Football Associations (UEFA) with a requirement to defend the Croatian footballer.

After the victory over Russia (3-2), Vida and another footballer of the Croatian team, Ognjen Vukojevic, recorded a video message, in which they dedicated their victory to Ukraine. "Glory to Ukraine! This victory is for Dynamo and for Ukraine. Come on, come on! Go, Croatia," the two players said speaking in Russian.
The video inevitably attracted attention of both the general public and journalists, and not everyone was delighted about it.

Following the reaction to the video, the Croatian Football Union (HNS) released a statement, in which it was said that the footballers made such a video to thank their Ukrainian fans who were very supportive of Croatia. HNS representatives also said that both Vida and Vukojevic had played for Ukraine in the past. They also noted that all members of the Croatian football team were recommended to be very careful in their statements, as some of them could be interpreted as political ones.

Tomislav Dasovic, a correspondent of the Vecernji List publication, said that Vida explained what he wanted to say with the video. "He had no desire to provoke the Russian people, not at all! He had lived in Ukraine for many years, so perhaps Domagoj wanted to show how much he valued the Ukrainian period of his career. Vida is not a politician, he never was," the journalist said. "I am sure that the defender admires the kindness and hospitality that he and members of the Croatian national team feel in Russia," he added.

Journalists of another publication, sportarena.hr, said that the video could be interpreted as a "direct provocation" against the backdrop of tense relations between Russia and the official authorities of Ukraine. Dnevno.hr website said that the Croats' actions came as "an act on the edge." Others in Croatia criticized Vida and Vukojević because they could face punishment from FIFA.

As a result, FIFA did not apply any form of punishment to Vida, but issued a warning to him. The player himself said that his statement was not political at all.

"The statements that defender of the Croatian team Domagoj Vida and midfielder Ognjen Vukojevic said after the match against Russia came solely as their response to many words of support that they have received from Ukrainian fans during the World Cup. Both Vida and Vukojevic had played for Dynamo Kiev in the past," the statement on the website of the Croatian Football Association said.

Domagoj Vida himself said: I treat the Russian people with respect. It was just a joke for my friends from Ukraine. Football is out of politics. I did not mean anything bad," the Croatian footballer said.

He had to expand his explanation some time later, when his statements attracted FIFA's attention: "I'm sorry about the fact that mass media have interpreted our message this way. It was clearly not a political message. I communicate in Russian with pleasure and I enjoy the Russian hospitality at the 2018 World Cup," he added.