EU and Western Sahara: The Hassle and the Controversy!

EU and Western Sahara: The Hassle and the Controversy! 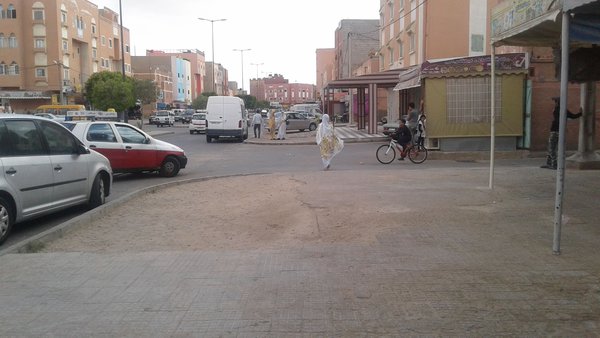 El-Aaiun, Western Sahara: On Monday, June 11th of 2018, the European Commission adopted an agreement in the form of an exchange of letters between Morocco and the European Union (EU) in order to grant preferential tariffs to products originating from occupied Western Sahara, particularly agricultural and fisheries products. This agreement will serve as an amendment to the Association Agreement between Morocco and the EU if later adopted by the European Parliament.

Morocco continues to plunder the resources of Western Sahara with EU´s Blessing:

The Moroccan authorities have been plundering the natural resources of Western Sahara for many decades with the complicity of several foreign firms and the support of Western powers, such as France and Spain who only run after their own benefits and personal interests. Funny enough, unlike in other cases, No embargo, no boycott, no sanctions, yet used or decreed by the international community against Morocco and companies that violate international law regarding the exploitation of the resources of a country still considered non-self governing territory. According to European justice, the inclusion of territory in the scope of the fisheries agreement "would violate several rules of international law, including the principle of self-determination"

According to Dr. Ghali Zbeir, a Saharawi official and an expert in the natural resources stated that no less than 56 companies of different nationalities and continents have signed contracts with Morocco and are active in various fields of economic activity in the territory of Western Sahara. Still, according to him, there are 9 companies in fishing, 18 in oil and gas exploration, 7 in electricity and renewable energies, 18 in phosphates, 4 in mining exploration, 2 in agriculture and as much in financing and other services.

The ECJ ruling on Western Sahara and its impact:

On 21st December 2016, the highest European court had already ordered that Western Sahara be excluded from the EU-Morocco Free Trade Agreement. The fisheries agreement was not included in this dossier. The court recognizes the fact that the "separate and distinct status" of Western Sahara recognized by the United Nations should be taken into account. This decision, a victory for the people of Western Sahara and their legal representative the Polisario, provoked strong tensions between Brussels and Rabat. They were both forced to renegotiate the agricultural agreement.

These negotiations are still ongoing. Just few days ago, the Polisario Front filed a new appeal against the decision of the Council of the European Union (EU) authorizing the Commission to open negotiations with Morocco to extend the EU-Morocco fisheries agreement to the Sahara Western and its maritime space, announced M'hamed Khadad, member of the Polisario Secretariat.

"Consultations with many local representatives of Western Sahara, civil society, and other organizations and bodies have shown broad support for the socio-economic benefits that the proposed tariff preference would bring," the European Commission stresses in a press release published a few days ago. Yet, the hypocrisy continues as the same Commission in its statement says: "These proposals are also concluded without prejudice to the EU's position on Western Sahara, where the EU continues to support the efforts of the UN Secretary-General to achieve a just, lasting and mutually acceptable political solution", says EU Commission.

Who is Who in Western Sahara?

Nonetheless, Saharawi civil society are opposing these statements are describing the EU Commission's act as a swift move to deny Saharawis their rights in favor of Morocco:  we received an invitation from the European Commission to participate in a meeting to "exchange views" in relation to the free trade agreement concerning agricultural and fisheries products which to be amended after the CJEU ruling on 21 December 2016 based on EU council's mandate. We were initially informed that the meeting was to take place on February 2nd, 2018 at the EU representation in Rabat ¨Says Babit, a founding member of the Al-Ghad Association based in El-Aaiun, capital of Western Sahara,

He Continues,¨ A second invitation followed on February 15th, 2018 where the Commission requested to change the location of the meeting from Rabat to Brussels and highlighting their engagement in open dialogue with the legitimate representative of the Saharawi people, the POLISARIO Front through its EU representation in Brussels¨.

In this same token, Other Saharawi associations joined in and denounced this act of treason and sent a letter to the head of the Moroccan government. The Salam Association for the Protection of the Environment and the Sustainable Development, The Protection of the Maritime Resources, The Environment and Fisheries Association, The Peoples Association and AIPMOD all issued a joint press release today, and which have a copy of, attacking the Moroccan Ministry of the Fisheries which forced their exclusion and marginalization while not fulfilling its promises and playing them around as if they were just puppets and decoys to be used for the benefit of the government to embellish the image of Morocco worldwide.

Saharawis and pro-Saharawis saying: This mere Conspiracy theory at work:

Western Sahara Resources Watch, a pro-Saharawi NGO, said it was "surprised" to be included in the list of organizations that refused to take part in the consultations because, as it states, it was "never invited to such a process, but only at an informal meeting ". WSRW have published an article with a list of the so-called NGO and stakeholders who were called to meet with the Commission. Most of these names were included without their consent while some were not even invited nor met with. The Commission called only pro Moroccans and made it look like it consulted all stakeholders including Politicians, MP´s, entrepreneurs, human rights associations and other civil society actors who were invited but not met with. Most of the individuals who went from Dakhla, for example, are part of the inner circle of the minister of Fisheries and have mutual interests. The question to be asked here: Who paid for their trip and all related expenses?

The People of Western Sahara Vs. The Inhabitants of the Sahara:

The Terminology of 'Saharawi people' versus 'population' is misleading: ¨ these concepts are fundamentally different. This is a deeply destructive and unsustainable approach which directly contravenes EU and international law, strengthens and funds Morocco's illegal occupation, and threatens to undermine the UN Political process and the efforts of the United Nations special envoy to Western Sahara¨ says Babit from Al-Ghad Association.Thus, according to data obtained from Saharawi activists, Saharawi benefits from their resources is as follows: 4.95% in the fishing sector, 1,21%in the agriculture sector, and 9% in the phosphate industry sector.

The term population is strictly geographical: it is the whole population of a country, a region or a city. In contrast, the term person is a more legal and philosophical notion. There is also have a second meaning, a more ethnic sense: this is the meaning that is taken into account in Western Sahara where the notion: ¨Saharawi¨brings together all the ethnic Saharawis, whether in Spain, Algeria, Mauritania or elsewhere, together bonding with each other. This ethnic notion of people has also been reclaimed by some in the context of national minorities or peoples who feel they are perceived as minorities around the world. Morocco is playing with words and is trying to mix things up for those who cannot make such a difference. ¨It does not matter how much Morocco is spending in Western Sahara because it is only money spent on settlers and on their own welfare while most Saharawis, excluding the Moroccan-made elite, are excluded from decision making and are impoverished. The Commission ignored many calls and emails from real Saharawi Civil society actors to be invited and met with it¨says Mohamed Sidati, the Polisario representative to the EU.

Questioning the ethics of the EU Commissions when dealing with Western Sahara:

All meetings were conducted either in Rabat or in Brussels while ignoring holding meetings in Western Sahara itself with the people of Western Sahara. The Polisario front was not even included in these negotiations despite the continuous calls to be part of the negotiations as it represents the people of Western Sahara. ¨Interestingly enough, the nature of the questions asked when met with these so-called Saharawis and civil society actors were very simple questions and asked the wrong people as some of them represent or works in sectors not related to the main theme and concentration of the negotiations. Mohamed El Baikam, a Saharawi activist, says during a phone interview. He even joked about it and said that one of the people invited and met with represented a local Couscous Cooperative, which has nothing to do with the fisheries. A similar case is also that of a representative of dairy products Cooperative that has nothing to do with these so-called negotiations as well. Most of these people did not even know how to answer the question when asked by the Commission. Mohamed El Baikam continues¨. The problem is that the Commission id trying to replace the consent of the people of Western Sahara by the consultation of the inhabitants of the Sahara. They are playing a dirty game here! ¨.

Questions to be asked to EU and its bodies:

Many Saharawis are asking these questions: To What extent is the EU Commission respecting the ECJ ruling? When will EU put pressure on Morocco to respect human rights in Western Sahara as part of its deals, signed and ratified in the agreement? Is there any special Committee to monitor and audit the funds directed and allocated to Morocco and Western Sahara? If Saharawis are benefitting from these funds and resources, where does it show, as there is still unemployment, poor infrastructure and deprivation of the basic rights? Where did the money from the previous agreement in 2013 go? Who was behind choosing the NGOs representatives and civil society actors that the Commission claims to have consulted? Does the Commission really have a full picture and data of the Socio-political and economic reality in the ground? How will the Commission guarantee the enforcement of the international law and the protection of the interests of the people of Western Sahara? Why not allocate some of the funds to the Saharawis in the refugee camps who are hardly surviving on international aid?

These are simple questions that Europe is obliged to answer and to look at thoroughly!