One must have noticed that pro-Western democracies on the territory of the former USSR tend to collapse very quickly, even though their Western preachers are always stable. This year, the governments of Kyrgyzstan, Armenia, and Georgia stepped down. Moldova and Ukraine constantly live under the threat of a sudden change of power. What makes Western democracies stable? Should other nations look up to them? 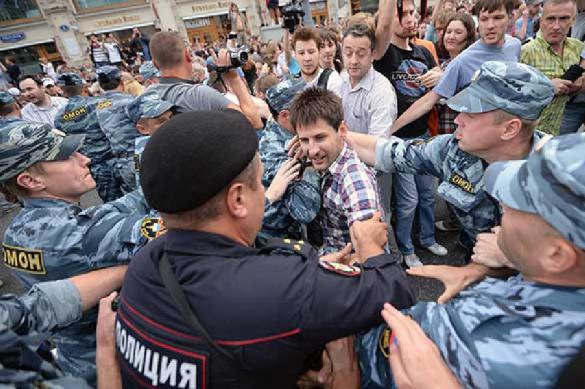 On June 13, the government of Georgia resigned in the midst of mass protests as people were demanding justice in the case of the murder of 16-year-old schoolchildren. Georgian Prime Minister Georgy Kvirikashvili tried to come to the action of protest near the parliament building, but protesters started throwing bottles at him shouting "Go away!" The prime minister left, together with his government.

The government of Armenian Prime Minister Serzh Sargsyan stepped down just as easily, supposedly due to intolerance of its political longevity. The Government of Kyrgyzstan was dissolved in accordance with the presidential decree, allegedly because of its efforts to establish relations with China.

Strangely enough, the impoverished Baltic States with their non-citizens and the persecution of the Russian-speaking population enjoy stable existence, and we do not see any hasty regime changes there.

Let's take a look at the problem from a different angle. In Germany, many want the federal government to resign over the recent murder of a 14-year-old girl (raped and strangled by Iraqi migrant). In France, one can often eyewitness street unrest, burning cars, barricades and violent clashes with the police. Most recently, protests sparked in France after the government cut social benefits. Nevertheless, neither Merkel nor Macron resign. They do not withdraw unpopular decisions either.

Mexico's pro-Western government chaired by Peña Nieto is just as unshakable, even though people have been trying to oust it since 2014 after the brutal murder of 43 students who took part in anti-government demonstrations. At the same time, the leftist government of Dilma Rousseff was subjected to impeachment in Brazil only because it violated budgetary discipline. Brazil's ex-Presdient Lula was jailed for nine years for an unproven bribe in the form of a three-room apartment. Noteworthy, the judge who ran Lula's case was educated and trained in the United States.

One shall assume that destabilisation and riots affect the countries that are either undesirable for Washington or problematic for Russia and other strong sovereign states (Venezuela, Hungary, China). The vassals stay in their offices even if they terrorise their own people.

Valery Korovin, Director of the Center for Geopolitical Expertise, told Pravda.Ru that the toppling of power is a tool of Western political technologists in network wars, in which the West establishes strategic control over a nation or a whole region through a series of color revolutions.

"The more unsteady a state, the easier it is to dismantle it and bring it under strategic control with the help of transnational external management," the political scientist said in an interview with Pravda.Ru. According to him, post-Soviet countries have never become full-fledged states - they live under the guise of statehood.

It is highly important for this technology to change power as often as possible. "In Georgia, they toppled the pro-Western Shevardnadze, a champion of perestroika. Then came Gamsakhurdia - another pro-Western puppet... Shevardnadze then returned, but some time later Georgia had Saakashvili, a liberal Westerner. Saakashvili was removed from power too, and oligarch Ivanishvili took his place," Valery Korovin said.

In Western countries, however, the power changes frequently too, but it happens within the framework of one and the same clans.