Animal Trump hides behind Syrian children to kill them

The hypocritical howling of Western politicians about all the misery that Syrian children have to go through makes one recollect the fate of Iraqi, Serbian and Vietnamese children. Do you remember what former Secretary of State Albright said when she was asked about half a million Iraqi children who died because of American sanctions? 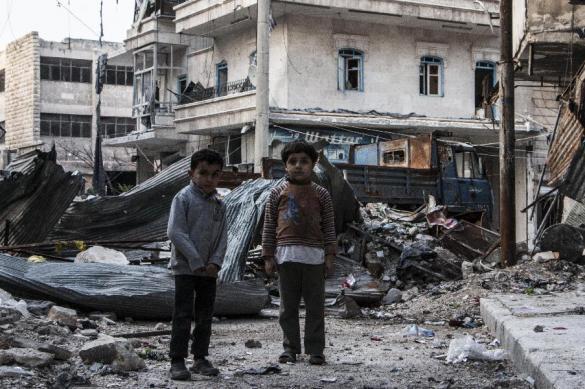 Donald Trump tries to justify the imminent missile attack on Syria with the need to destroy "Animal Assad" who gases Syrian children and tortures civilians in besieged cities.

"When you kill innocent children, innocent babies, babies, little babies, with a chemical gas that is so lethal ... that crosses many, many lines, beyond a red line," US President Donald Trump told reporters in April 2017. Ambassador to the UN Nikki Haley claimed that "Russian hands are all covered in the blood of Syrian children."

Who is killing Syrian children?

The Russian ambassador to the United Nations stated that the chemical attack in Syria's Douma was staged. The trajectory of the alleged chemical bomb looks unnatural. The doubts of Western sources about the identification of the chemical agent used in the attack also look suspicious. At first it was reported that the bomb was filled with sarin, then reports were corrected to chlorine. In fact, it is only chemists and independent experts, who can identify the poison when they take samples directly on the site. At the same time, it is impossible to do it, because no sane organisation will send its people to a war zone.

What good could Bashar Assad gain from the alleged chemical attack, given the fact that he already has Eastern Ghouta under control? Assad is winning the war in Syria at a time when Donald Trump was talking about the need to pull US troops out from Syria. Why does Assad need to gas Syrian children? At the same time, this seems to be a goal to achieve for the Islamic group, which settled in Eastern Ghouta.

This attack is beneficial to the Americans as well. In fact, it is not Bashar Assad and his "atrocities" that determine the policy of the United States. The "atrocities" of Saddam Hussein and Muammar Gaddafi did not determine the US policy either. The policy of the United States is determined by the fact that the above-mentioned leaders did not want or do not want to succumb to the Americans and the world government that they have created. In this regard, expressions of public concerns for Syrian children appear to be just an excuse to unleash punitive actions against Assad.

In 1996, a report from the UN Food and Agriculture Organisation said that 567,000 Iraqi children under the age of five years died as a result of the sanctions that the USA had imposed on Iraq for invading Kuwait. Those children died from diseases and malnutrition. Then US Secretary of State Albright was asked whether the goal (the liberation of Iraqis from Hussein's "tyranny") was worth the price. "We think it was worth it," Albright said.

Later, when the United States unleashed the war against Iraq, they held a siege of Fallujah in 2004 by bombarding the town with cluster bombs stuffed with depleted uranium and white phosphorus. In 2010, as Patrick Cockburn wrote for The Independent, the number of crippled children in Fallujah was 13 times the average European level. Two or three children with congenital abnormalities would be born in the town every day. The number of cases of leukemia increased 38 times. Local authorities were forced to urge women to abstain from pregnancy.

Such bombs had been used in the Persian Gulf in 1991 and then in Yugoslavia in 1999. Because of those mini-nuclear wars, women of Basra give birth to limbless, eyeless and two-headed babies.  Congenital abnormalities are diagnosed in more than 50% of newborns. However, no one cares about the problem, Darya Aslamova reported in the Komsomolskaya Pravda newspaper.

So who is the "animal" here?

In Serbia, Aslamova wrote, doctors are too scared to collect facts for the criminal prosecution of "those gangsters from NATO." "We are going to be killed one after another," doctors say. To understand all the horror of these facts, one can bear in mind the fact that uranium half-life takes up to 4.5 billion years.

According to the Vietnamese Red Cross, babies born in the areas where the Americans used to spay Agent Orange during the 1960s and the 1970s, get sick much more frequently, they suffer from congenital abnormalities - there are nearly one million people who have to live like this.

Do US or British officials care a bit about those Iraqi, Serbian or Vietnamese children? Yet, they seem to be concerned too much about Syrian children. This is what the horror of the situation is all about. It is only utter scoundrel, who can hide behind innocent children to commit aggression against them - Animal Trump.