Germany's military might grows either for another Reich or another defeat

Germany intends to play the leading role in confronting Russia along eastern borders of NATO states. The Americans manipulate the Germans accordingly through the UN Charter, a US army base on the German territory, and the German gold stored at the Federal Reserve. How will Russia respond? 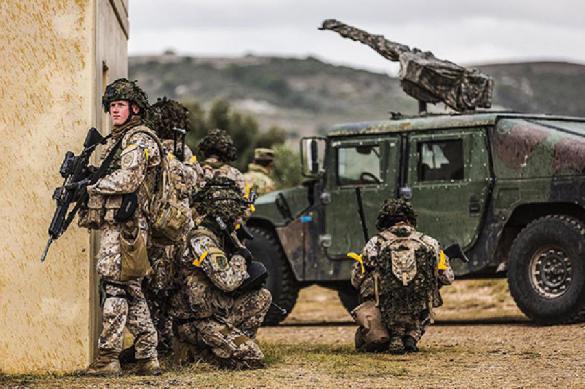 The Bundeswehr plans to increase the number of troops participating in exercises on the eastern borders of the alliance to 12,000 men, German publication Focus reports. The operation will cost Germany 90 million euros, which is twice the amount used last year. This will send "a clear signal of intimidation to Vladimir Putin."

For the time being, however, there is nothing Germany can do to intimidate Russia, because the Bundeswehr needs to improve a lot in the Germany Army. German planes "do not fly, submarines do not submerge, tanks do not roll," the publication wrote. The modernisation program will work fully from 2023. All shortcomings in material and technical supplies of the German army are to be eliminated before 2020. The reforms will last for ten years; there is a contract for the comprehensive upgrade of Leopard 2 tanks (about 100 vehicles).

The Bundeswehr will also create a NATO planning and management centre, which will be responsible for rapid transportation of troops and weapons - the so-called Very High Readiness Joint Task Force to counteract Russia. Years of savings have ended, the German press says.

Sergei Ermakov, the head of the regional security sector at the Centre for Defence Studies at RISI, told Pravda.Ru that the number of NATO exercises near Russia's borders tripled over the past three years and amounted to about 250 drills a year. These are exercises of different intensity, including full combat manoeuvres, in which Germany intends to increase its participation. The expert does not see anything strange about it, because Germany is a consistent member of the alliance, which the USA has been criticising for making insignificant contributions to deter Russia - less than two percent of GDP.

"NATO as a foreign policy instrument of influence remains under the control of the United States. Naturally, it will continue to fulfil its role to speak to Russia from the position of force," the expert said. "When a country joins NATO, it loses a part of its sovereignty by giving it to the US, and we see it on the example of such a great and large country as Germany," Sergei Ermakov said in an interview with Pravda.Ru.

Is Germany a great country indeed? Germany's colonial status is established by the UN Charter, the presence of a US military base on German land and by the "privatisation" of German gold on the territory of the United States.

German historian Josef Foschepoth said in an interview with the ZDF channel that former occupation authorities have the right to spy on German citizens to this day. Modern-day Germany, the historian believes, is not a sovereign state.

"Occupation treaties of the past are still in effect, although they have different names, and any federal government is bound to observe them," Foschepoth said.

German Defence Minister Ursula von der Leyen faces criticism in her home country for the collapse of the army, even though US officials refer to her as a successor to Angela Merkel. Apparently, the Americans believe that Frau Leyen is ready to sign secret protocols on the "Atlantic brotherhood."

Moscow does not have political levers of influence on Berlin, since the USSR withdrew its military bases from the GDR. Therefore, Russia is unable to implement provisions of the UN Charter to retrieve the pre-1955 form of government in the country should Germany's "aggression" grows.