Turkey has been a staunch NATO member for almost 70 years. As it appears, though, Turkey no longer wants to keep its membership in the alliance. This is evidenced by the recent inconclusive visit of US Secretary of State Rex Tillerson to Ankara. Is NATO going to let Turkey go? 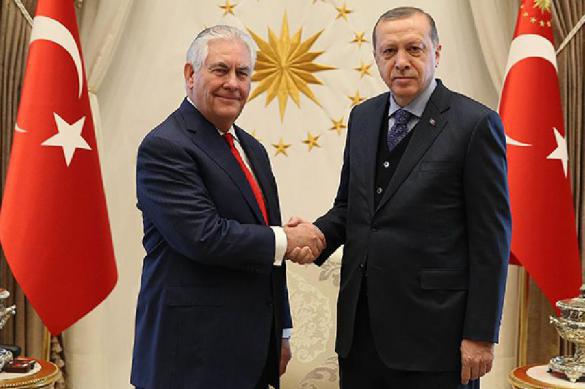 Turkey is de facto no longer at NATO

Having visited a number of countries in the Persian Gulf, US Secretary of State Rex Tillerson had a four-hour conversation with Turkish President Recep Tayyip Erdogan in Ankara. Contrary to everyone's expectations, no joint press conference was given afterwards.

One may assume that Ankara and Washington are de facto in opposite geopolitical camps largely because of the attempted coup d'etat in 2016, which Washington supported and hid instigators.

Erdogan considers the policy of the USA's support for the Kurds in Syria a gross insult. Ankara makes no distinction between the Syrian Kurdish militia (YPG) and the Kurdistan Workers' Party (PKK) - a terrorist organisation, which the Turks have been struggling against since the 1980s accusing the organisation of attempts to undermine Turkey's integrity. This confrontation has claimed the lives of nearly 40,000 people.

The relations between NATO's nominal allies exacerbated after Turkey launched a military offensive on the city of Afrin in northern Syria, trying to stop the Syrian Kurds from gaining a foothold in the region. On February 14, Erdogan threatened the United States with an "Ottoman slap" (a deadly blow of Turkish soldiers), if the US-supported Kurds refused to leave the city of Manbij.

Turkish Defence Minister Nurettin Kanikli demanded Washington should exclude YPG from the alliance of the armed opposition forces in Syria, the so-called Syrian Democratic Forces (SDF), supported by the United States. It is unclear, however, how this can be achievable, because YPG is the basis of the SDF. It is not clear either how they can leave Manbij as long as American advisers are staying there, so such a move would mean the direct surrender of their positions in Syria. To crown it all, Washington does not have other ground forces on Syrian territory.

In a nutshell, all of Turkey's demands on the United States are impracticable.

What kind of an answer are the Americans preparing? For the time being, the US has refuted all accusations and pledged to take retaliatory blows, including in response to the "Ottoman slap in the face." This was stated by Paul Funk, the commander of American troops in Syria and Iraq.

Tillerson said in a conciliatory tone that he understands "Turkey's concerns." The US has another response - sanctions, of course. After a banker close to Erdogan was convicted in New York for allegedly assisting Iran to bypass USA's sanctions, the USA may develop the story further. Last year, the United States stopped issuing nonimmigrant visas to the Turks, provoking them to responsive measures.

Washington may impose sanctions against Turkey's banks and defence industry. Turkey's economy suffers from huge budget deficit (5.6% of GDP), capital flight ($341 million only in November-December 2017) and debts. Net foreign exchange reserves of $32.9 billion and $116 billion of bank reserves are not enough to cover six months of imports (one of the key indicators used to characterise the stability of the economy). They do not give an opportunity to repay $170 billion of foreign debt in the next 12 months, Ahvalnews reports.

In other words, USA's strategy against Turkey will be similar to that against Iran and Russia. Iran had to give up on a part of its sovereignty, but Russia did not. What will happen to Turkey?

Erdogan to create a military base in Sudan

Meanwhile, Erdogan is preparing for countermeasures. In addition to the new centre of influence - the axis of Russia, Turkey and Iran, another hub has been gathering pace: Turkey-Sudan-Qatar. While Moscow is thinking whether to accept the offer from Sudanese President Omar al-Bashir to create a military base in the country, Erdogan will receive access to the Red Sea.

Turkey signed an agreement to transform the island of Suakin - a port in the north-east of Sudan - into a "cultural and tourist centre of the country, having thus obtained full administrative authority over the island city. Plus, Turkey's military presence there will ensure control over the Red Sea and grant the country access to one of the busiest transit routes for the transshipment of oil (more than 4.5 million barrels per day) - from the Persian Gulf to the Suez Canal.

Turkey's presence in the Red Sea is bad news not only for Egypt, but also for Saudi Arabia - and hence for the US, because Ankara supported Qatar in the conflict with the kingdom.

Indeed, Turkey may exit NATO. Erdogan also considers buying a second S-400 missile system, and this will not be left without Washington's attention. If Washington imposes sanction's on Turkey for buying the system, Turkey may close the Suez Canal. Why not, even a verbal threat will destabilise oil quotes.

One should bear in mind the fact that Turkey is not a trusted ally of Russia. Turkey supports terrorists of Jabhat en-Nusra organisation (banned in Russia), who shot down Russia's Su-25 over the de-escalation zone of Idlib and killed its pilot Roman Filipov. Moscow should think of a way to build alternative axes in the region, if Sudan and Qatar do not object.