Former Russian MP shares all secrets of the Kremlin with Kiev

The hearings of the case the former president of Ukraine Viktor Yanukovych continued in Kiev on February 14. This time, the main newsmaker is former State Duma deputy Ilya Ponomarev, who spoke about the background of Maidan riots and the coup in Ukraine in late winter and early spring of 2014. 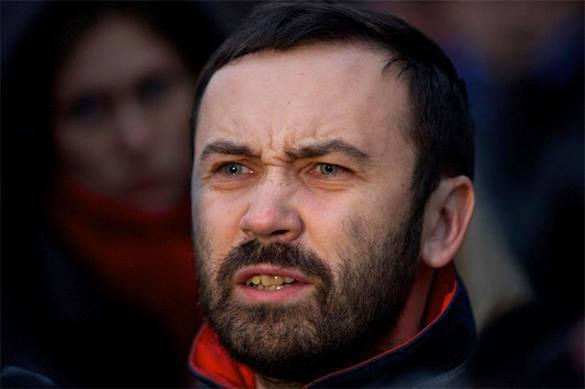 Ponomaryov, formerly a Russian MP, said exactly what the sitting Ukrainian authorities wanted to hear from him. Ilya Ponomarev now lives in Kiev, which means that there were no doubts about the content of his speech in the courtroom.

Judging from the speech, it appears that Mr. Ponomaryov is a very informed person, who allegedly knows everything about every decision that Russia had made in 2013-2014.

For example, according to Ponomaryov, prior to Viktor Yanukovych's escape from Ukraine, a helicopter crashed, in which the Russian president was allegedly flying. "Putin nearly got into an air crash in Sochi with a helicopter, he had a hard landing, and he took it as an attempted assassination, in which foreign special services were involved. The same day, Yanukovych fled, and he was in such a mood that conspiracy was everywhere," the former MP said.

Ponomaryov himself was not anywhere near, when all that was happening. He said that he learned the information from an officer of the Federal Security Service.

That's not all. Ilya Ponomaryov told how the Russian president made the decision about the "annexation of the Crimea". "On February 22, 2014 overnight, a meeting was held with Putin's participation and four other people, all from the top leadership of Russia. They gathered to discuss what to do in connection with such an unfavourable for the Kremlin development in Ukraine. It was at that meeting when Putin put the question of the annexation of Crimea, but my interlocutor told me that the majority at this meeting was against it," the former State Duma deputy said.

Of course, Mr. Ponomaryov is familiar with representatives of the top Russian administration. However, it seems very doubtful that someone from the country's top leadership - only five people - could retell the conversation to him. Roughly speaking, who is Ilya Ponomarev to be informed about this? It is more likely that the former MP simply fed a rumour to the Ukrainian court.

Ponomaryov also confirmed the prosecution's version, according to which Russia bribed Yanukovych with one billion dollars, although the lawyers of the former Ukrainian president asked the court to dismiss prosecutors' question on the subject, pointing out that "the current Ukrainian administration has been disseminating this fake news through the media for years."

Ponomaryov was asked a reformulated question. The ex-deputy did not let the prosecutors down: "I completely confirm that this was bribery in the literal sense, lawyers should be given a textbook on economics," Ponomarev said.

"According to the information that I received from informants, including Deputy Prime Minister Igor Shuvalov, the goal was to engage the financial interest of the Yanukovych family, because in Russia everyone understood that Ukraine was governed through family ties and interests," he said.

Ponomaryov noted that the so-called sale of bonds was a "classic insider deal" that enriched the eldest son of President Yanukovych - Alexander Yanukovych.

Recall, in late 2013, Russia gave Ukraine a loan of $15 billion. Before the coup, Russia managed to buy Ukrainian bonds worth $3 billion, which Kiev refused to return. In March last year, the High Court of London sustained Russia's demand for the return of three billion. Ukraine, of course, appealed the decision, and the litigation continues.

It is worthy of note that the Russian Investigative Committee suspects Ilya Ponomaryov of aiding the embezzlement of $750,000 of the Skolkovo Innovation Fund. In 2015, then-MP Ponomaryov left Russia and since then he has not expressed a desire to return. He said that he received permission for temporary residence in Ukraine, where he moved. In June 2016, he was deprived of his mandate due to the failure to execute his duties.

In an interview in the summer of 2017, the former MP suggested the Ukrainian authorities should arm the Russian opposition and send it to the Kremlin. The man depends now on the mercy of the Kiev authorities, so he keeps on spinning his record.