The UN General Assembly adopted Ukraine's resolution which condemns violations of human rights that allegedly take place in the Crimea. 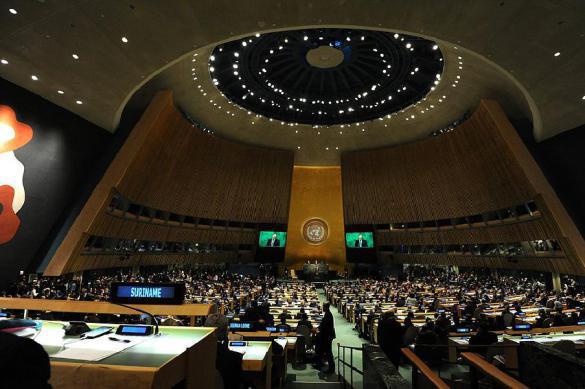 On December 19, the document was adopted by a majority vote: 70 countries voted in favor of the resolution, mainly the USA and its satellites, while 26 countries voted against it, including Russia, Armenia, Belarus, Bolivia, Venezuela, India, Kazakhstan, Cuba, North Korea, Serbia, Tajikistan, Uzbekistan and South Africa.

China and 76 other countries abstained from making a decision on the subject. In its decision, the UN General Assembly pointed out Kiev's efforts aimed at "putting an end to the Russian occupation of the Crimea."

Ukraine prepared the resolution in co-authorship with 30 countries. Ukrainian Minister for Foreign Affairs Pavel Klimkin called the process of adopting the resolution "one of the most difficult" ones. "The pressure on Russia has been strengthened, and we are grateful for your strong position and support, friends," Klimkin wrote on his Twitter account.

Meanwhile, Russian officials expressed their negative opinion about the document calling it "biased and unfair." Crimea's Minister for Information and Mass Communications, Dmitry Polonsky, called the report an act of "international nonsense."

At the same time, the UN General Assembly Committee on Social, Humanitarian and Cultural Affairs adopted Ukraine's draft resolution on the state of human rights protection in the Crimea. The document calls Russia an "occupant power," urges to start school education in the Crimean Tatar language and lift the ban from the Mejlis of the Crimean Tatars, which Russia had recognized as extremist organization.

As long as Ukraine's most recent resolution has received the support from the USA and its satellites - from Canada to Japan, including the EU - it appears that it was the United States that made the resolution real.

Noteworthy, the UN Secretariat acknowledged that as early as on March 1, 2014, the department received and verified with the official press of the organization the statement from the "toppled" President of Ukraine Viktor Yanukovych, who requested the deployment of Russian troops in Ukraine. In other words, the legitimate (from the point of view of world and Ukrainian legislation) President of Ukraine notified the UN about the need to deploy Russian troops for the purpose to restore the constitutional order in Ukraine.

Crimean officials criticized the adoption of the Ukrainian resolution on the situation with human rights on the peninsula. The UN has thus discredited itself and nullified its authority, representatives of the Crimean authorities said.

"The UN gradually loses its functional responsibilities, and has ceased to meet the realities of world politics in the field of security, stability and respect for human rights," Vice Speaker of the Crimean Parliament Remzy Ilyasov told RIA Novosti.

According to him, the Crimea regrets "the UN has become a platform for Western powers to defend and promote their issues." "We are tired of repeating it: there was no annexation. The question of annexation should not be raised at all. It was the people of the Crimea, who voted overwhelmingly for the opportunity to live in Russia. Western countries should at least facilitate the integration of the Crimean economy into the Russian economy rather than increase tensions and encourage violations of rights of the Crimean people," the vice speaker said.